With 77% of the votes, Walter Benítez is unsurprisingly your Crédit Agricole Aiglon of the Match from the 3-0 win over Brest. Having made multiple key saves in a game that was made all the more difficult by Les Niçois’ numerical disadvantage, our keeper proved to be impenetrable. He finishes ahead of Pablo Rosario (6%), who lit up the middle of the park in Brittany, as well as Amine Gouiri and Justin Kluivert (5% each), who were courageous and incisive in the final third.

In a match that saw Le Gym score three goals and register another three shots on target, Walter Benítez being named as the Crédit Agricole Aiglon of the Match further underlines just how important his display was. Away to Brest, his role as Nice’s last line of defence took on another dimension, and his activity inevitably increased when Le Gym were deprived of one of their key elements in the 20th minute. “We knew that it was going to be tough, especially after the sending-off [of Morgan Schneiderlin]. It made the game difficult,” commented the main man after the win. Yet, at the Stade Francis Le Blé, everything seemed to come so naturally to Benítez, who looked extremely comfortable when called into action by the waves of Brest attacks.

Whether on his line, inside his six-yard box or further forward inside his penalty area, he faced 26 shots on Sunday – the fourth-highest number of shots conceded by Nice since 2006-2007 – as well as 45 crosses! Having made nine saves yesterday, the former Quilmes man made not only the highest number of interventions for a goalkeeper in the top flight this season but also his second-highest personal total in Ligue 1 since the game against Montpellier in September 2020, in which he made ten saves. As a leading light for Le Gym, Benítez allowed Les Aiglons to stay on course during the moments when Brest were on top, and his important contribution to Nice’s fine win has been rewarded by Les Rouge et Noir’s fans. 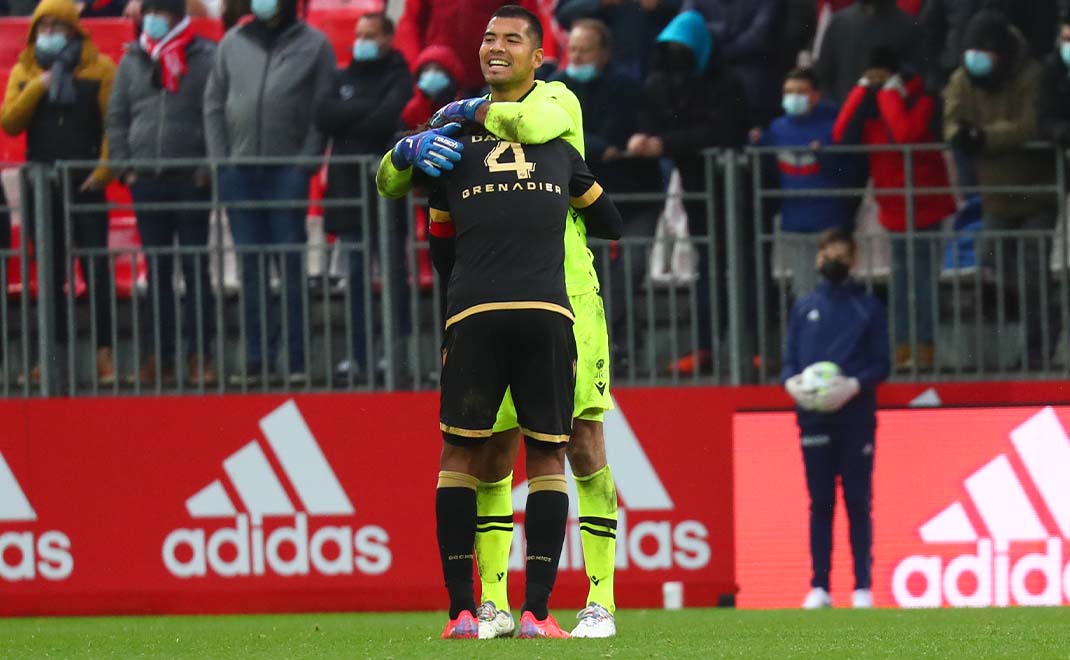 FOUR AIGLONS ON THE PODIUM

Finishing below Benítez, Pablo Rosario stood out with a perfect display full of defence-splitting passes, destructive forward runs and hard-fought physical battles. Having won back possession eight times – the second-highest total of the match – the Dutchman also distinguished himself by lighting the fuse of the game with a low, hard shot in the opening minute.

In joint-third place, Amine Gouiri and Justin Kluivert get their rewards for a hard-working performance in defence and an efficient performance in attack. Both players boosted their stats on the trip to Finistère, with the former bagging himself a goal and an assist while the latter played the final pass for Nice’s opening goal.

RED AND BLACK ALL OVER THE PITCH

After each round of league fixtures, French sports newspaper L’Équipe publishes their Ligue 1 team of the weekend. Today, the team for Matchday 20 has a distinctly red-and-black look to it, with four Aiglons featured. Aside from Walter Benítez, who has been given a score of 8/10 by the daily, Dante earns his place in defence behind Pablo Rosario and Amine Gouiri. Our performance away to Brest is also rewarded by OGC Nice being named as the team of the weekend and our coach, Christophe Galtier, being named as the manager of Matchday 20!

Coach Galtier is the manager of the weekend, whilst #OGCNice are the team of the round! 🔴⚫️ pic.twitter.com/lK9HOoZv85