Reduced to 10 men for 70 minutes following Schneiderlin's harsh red card, Le Gym dug deep to secure a first victory of 2022 on the road at Brest (0-3). After Dolberg gave them the lead, Les Rouge et Noir held on as the home side piled on the pressure, before extending their lead through substitute Delort and then Gouiri, after an impressive solo break. OGC Nice regain their spot in second place of Ligue 1 after 20 matches!

Les Aiglons started the match with character and determination and it didn't take them long to warm up Marco Bizot's gloves. After just seconds of the match, Kasper Dolberg found Pablo Rosario on the edge of the box. With a first-time effort, the Dutchman found the target (1’). Looking very lively and involved across the pitch, the midfielder was then at the heart of Le Gym's next two chances. For the third, he battled in midfield in order to win the ball back and found Justin Kluivert. On the left, the winger pulled three Brestois out of position and found Dolberg in a good position. The forward's excellent strike flew right into the back of the net and gave Les Rouge et Noir a deserved lead (0-1, 13’). 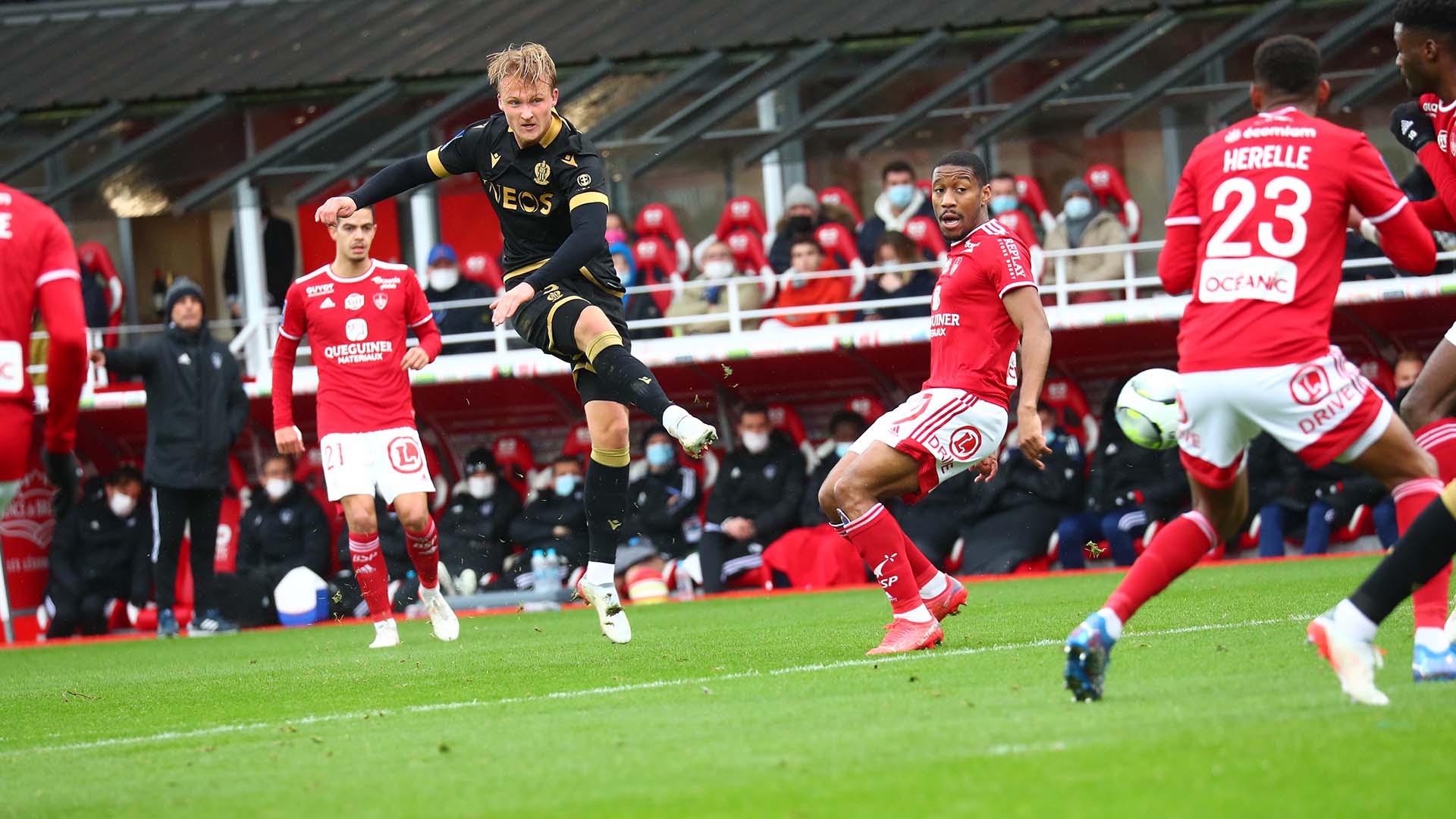 In the minutes that followed the opener, Walter Benitez was called into action to maintain his side's lead. First of all, he came out on top to deny Steve Mounié, who connected with a ball in from the right and then Jérémy Le Douaron at the end of a smart team move. After grinning and bearing it, Le Gym were forced to drop a tad deeper when Morgan Schneiderlin was harshly sent off by Stéphanie Frappart. After winning the ball, he made contact with Christophe Hérelle, and the French international received Les Niçois' first red card of 2021-2022. With a numerical disadvantage, Nice were forced to withstand the hosts' attacks, but could count on the trusty Argentine between the sticks, with Benitez proving decisive to stop Agoumé and then Le Douaron (40’). At the end of the first half, Les Aiglons looked to attack on the counter. Played in by Kluivert, Dolberg saw his effort turned away (45’). Just after that chance, Rosario beautifully played a ball to Gouiri, but the forward was beaten to it by Bizot.

Down to 10, Le Gym dig deep and then extend their lead

The second half was very similar to the final half an hour of the first. Benitez continued to thwart the Brest attacks, Les Aiglons were exemplary in defence, dug deep and looked to strike on the counter. From a corner, SB29 continued to threaten and Hicham Boudaoui needed to be vigilant on his line to clear away a diving header from Chardonnet (62') and then Todibo denied Mounié (72'). Christophe Galtier sent on Andy Delort, Khephren Thuram and Alexis Claude-Maurice to strengthen the heart of his side and to bring fresh blood to his team who still had the lead. The changes made a difference in relieving some of the home side's pressure. At the other end of the pitch, Gouiri and Delort made the most of a ball won back in the heart of the pitch to link-up. Played in on goal, the number 7 made no mistake in his one-on-one with Bizot to double his side's lead (0-2, 79'). The Algerian's seventh goal for Le Gym, was quickly followed by an impressive solo goal from Amine Gouiri. After winning the ball on the edge of his box and running the length of the pitch, the number 11 broke into the area, beat his man and struck into the back of the net with the help of the post (0-3, 90'+3). At the end of a brave team performance, Les Rouge et Noir are back into second place in Ligue 1! 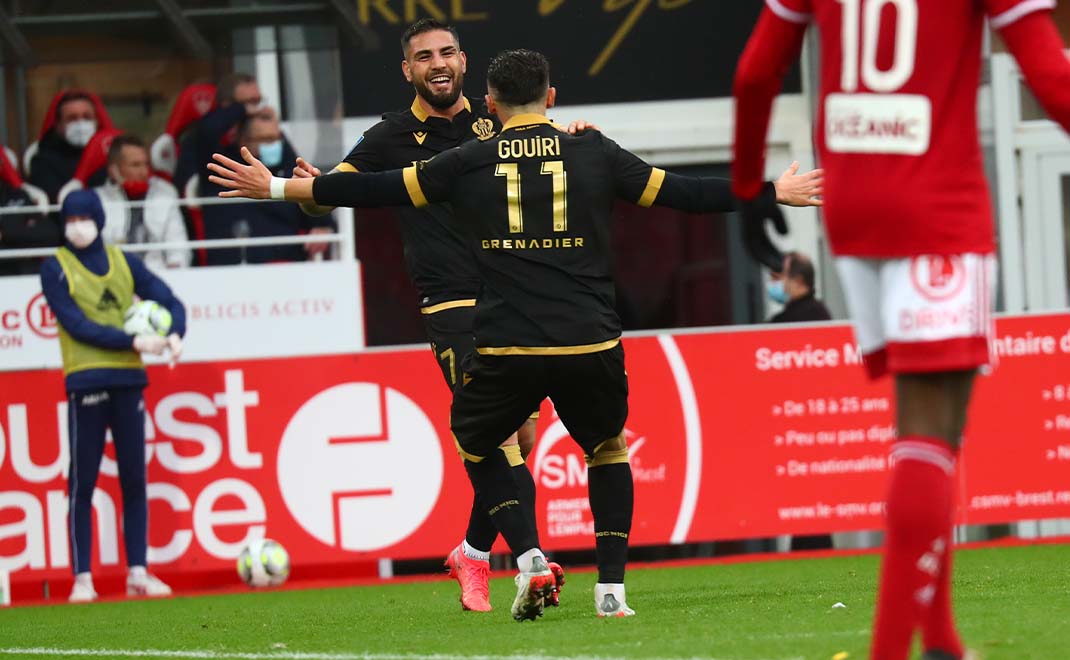 Les Aiglons will be back in action at the Allianz Riviera next Friday for the visit of FC Nantes (9pm) on Matchday 21 of Ligue 1. 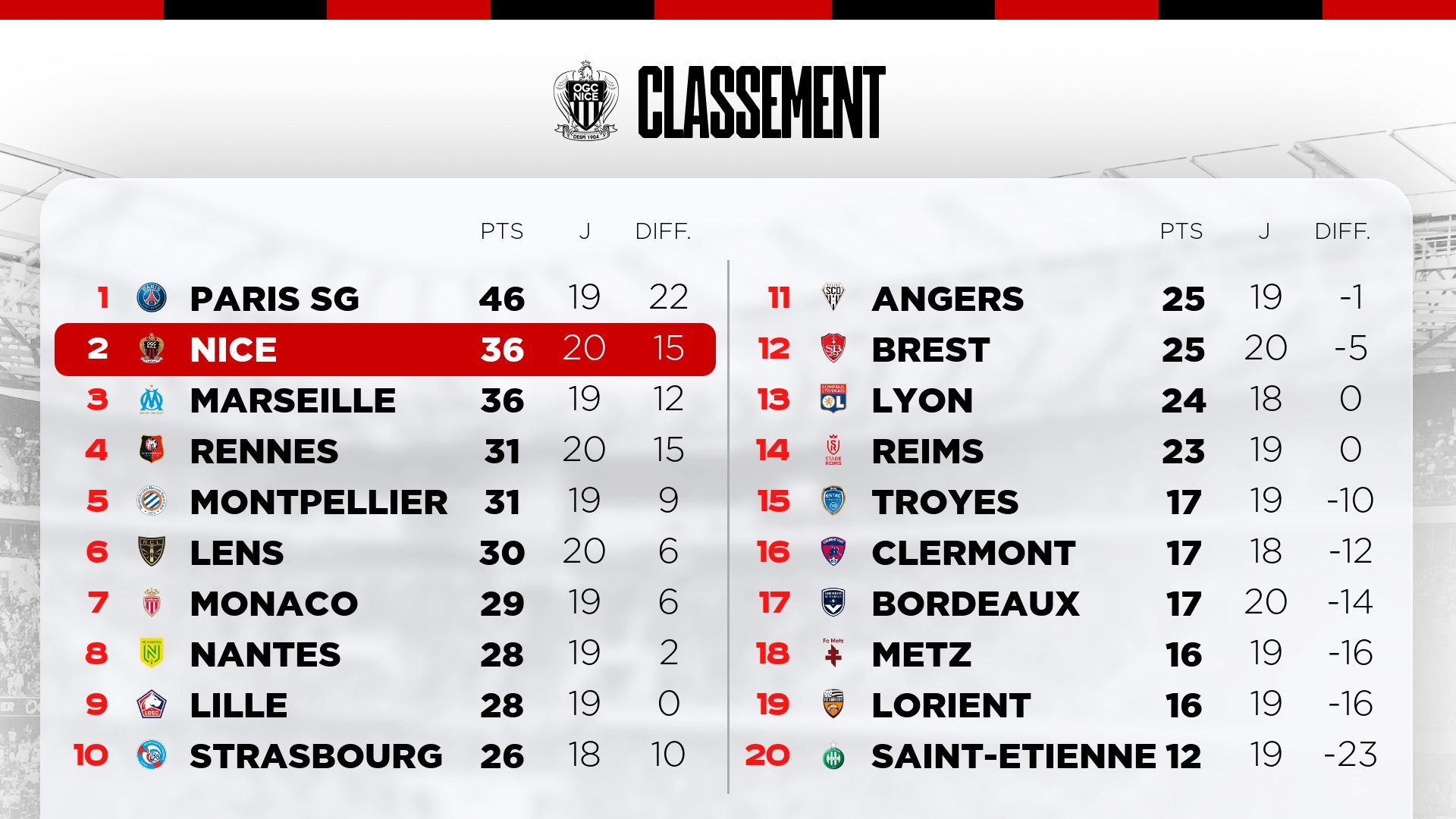