After a huge performance, OGC Nice went out and dominated Lille on Matchday 2 of L1 (0-4).

Against the current French Champions, who were celebrating their title in front of their supporters, Le Gym were faced with a big test on Saturday. They stood up to that test and didn't disappoint, and impressively ensured that they took home all three points from the L1 holders. Adding to the point picked up against Reims in the league opener last week.

At kick-off, Christophe Galtier, who had a tribute dedicated to him by the Stade Pierre-Mauroy before the match, made four changes to his starting line-up. Sticking with a flat 4-4-2, the coach started Melvin Bard on the left of his defence, Mario Lemina at number 6 alongside Rosario, Hicham Boudaoui on the right side of midfield and Kasper Dolberg up-front.

The four players put in a magnificent performance. In the same way as their teammates, because the Red and Black block played perfectly as a team and left Les Dogues with next to nothing throughout the encounter.

Les Aiglons made life easier for themselves in the first minute of the match, when a short corner saw Amine Gouiri break into the box. The n°11 struck at goal, JC Todibo was denied by Jardim and the post, and Kasper Dolberg, the fox in the box, tapped home to set his side on their way (0-1, 1’).

Four minutes later, after some excellent pressing from Dolberg, Gouiri picked the ball up on the edge of the box and played to Boudaoui. The Algerian international doubled the lead with a perfect strike into the back of the net (0-2, 5’). Following this incredible start, Le Gym dropped off slightly, and allowed their hosts to keep hold of the ball, maintained their discipline and aggressively attacked every ball, while remaining dangerous on the break.

In the first half, Lille created just one chance, a strike from Yilmaz turned away by Benitez, and just before the break, it was Les Aiglons who extended their lead after a sumptuous move between Boudaoui and Atal, which led to a strike from Dolberg being blocked by André's arm. Gouiri stepped up to take the spot-kick (given after consultation with VAR) and allowed his side to head into the dressing room with a three goal lead.

They came out after the break with the same desire and the same commitment. Aside from a free-kick from 20 metres out, from which Yilmaz missed the target, the visitors gave nothing away to Lille. And the cherry on the cake, they even scored a fourth goal from another corner, when after a flick from Dante, Dolberg beat Jardim to make it a brace (0-4, 64’).

The Dane's header seemed to be the final nail in the coffin. Following that LOSC fizzled out, while Le Gym continued to shine. Gouiri thought he had made it 5-0, before VAR spotted Myziane in an offside position at the start of the move.

Myziane who had made a prefect entry into the game alongside Lotomba, Thuram, Kamara and Ndoye, and who all played their part in Les Azuréens' victory in the north of France.

Next up: The Derby of the South against Marseille next Sunday at the Allianz Riviera.

The victory in images: 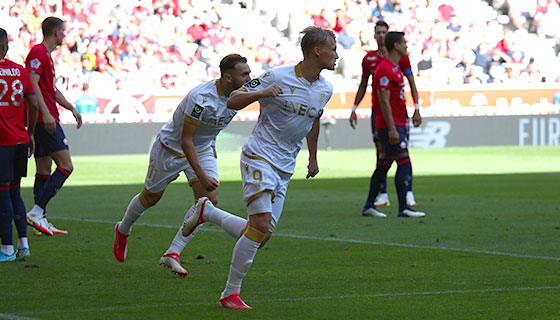 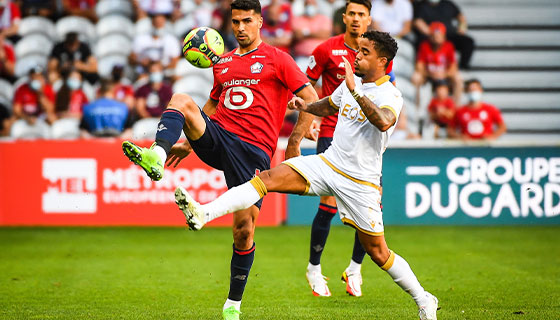 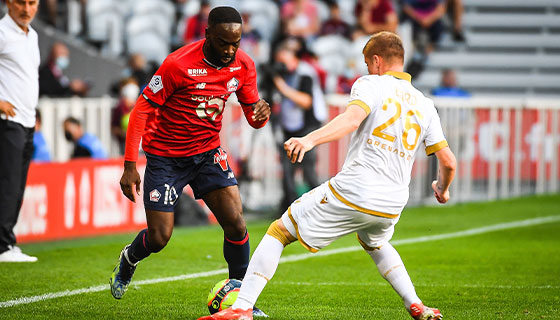 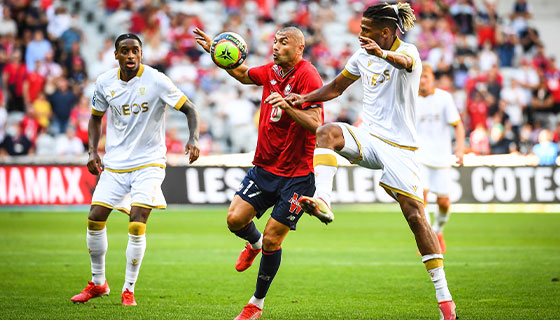 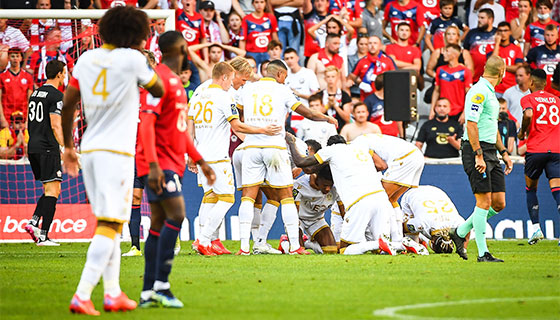