Les Aiglons host Stade Brestois on Sunday on Matchday 36 of L1 (kick-off at 3pm). Check out the names of the 20 players called up by Adrian Ursea for the battle against Les Finistériens.

After Morgan Schneiderlin (calf), Stanley Nsoki was ruled out of the encounter after feeling some pain in his adductors. Two absences on top of those of Myziane, Jeff Reine-Adélaïde and Dante (injured), while Jordan Lotomba is suspended for the encounter after his red card at Lille last weekend (2-0). 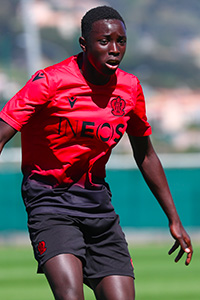 OGC Nice Academy Director, Manu Pirès presents youngster Antoine Mendy (16 years old): "Antoine joined the academy two years ago from the Pôle Espoirs d'Aix-en-Provence. He is an extremely humble lad who has had an exceptional upbringing. Above and beyond his qualities as a player, he is adored across the whole club (schooling, medical, sporting and lodging). He is committed and really attached to the club. We have brought him through the ranks as a full-back, but he can equally play through the middle of the defence. He is tough, a real defender, but he is also capable of adding a lot in attack too (until his arrival at Le Gym, he was playing at number 9). He has progressed incredibly in recent weeks and has been able to take advantage of the needs of the first team squad to show his quality in training. He will be able to discover the inside workings of the preparation for a Ligue 1 match. I thank the first team staff because this immersion will give a lot to him, before he returns back to reality with his own age group. On a footballing level, he still has a lot to learn and we will ensure he is supported correctly so that he doesn't get ahead of himself: in football, there is never really an end, there are only beginnings."