The Promenade du Paillon was red and black with people this Wednesday evening to welcome OGC Nice's six summer recruits. Six, yes, because one guest made a surprise appearance, much to the delight of the 2,000 fans present: Kasper Schmeichel.

In the heat of this early August, more than 2,000 OGC Nice fans made the trip to the Promenade du Paillon to greet the new recruits. This Wednesday evening, as soon as the doors opened at 17:00, the queue in front of the tables ready to welcome the players was impressive. Everything was ready for the first three to present themselves to the public: Mattia Viti, who signed at noon on Wednesday; Rares Ilie, who has been here for a few days; and Marcin Bulka, whose transfer was made permanent in July.

The young Italian was impressed by the welcome from the people of Nice: "I didn't expect to see so many people so soon after my arrival, I am very happy that they are here."

Ramsey and Beka-Beka in the second curtain

As soon as the first trio left, they were replaced by two midfielders in front of a packed queue. Under the notes and lyrics of Nissa La Bella, the ex-Gunner and the former SM Caen man received a standing ovation, before getting their pens - and smiles - ready for the crowd.

A meeting that both men enjoyed, according to the Welshman.
"It's always nice to have this kind of event, so it's great to meet the fans," smiled Ramsey, before promising that he would learn the words to the Nice anthem.

Far from sated, the Nice fans enjoyed one last surprise in the setting sun. On the stage, Jean-Pierre Rivère, the president of OGC Nice, took the microphone, flanked by Aaron Ramsey and Alexis Beka Beka. He then revealed the identity of Le Gym's latest recruit: Kasper Schmeichel. The Danish goalkeeper, who has just arrived on the Côte d'Azur, got a first glimpse of how popular he will be in the city!

The English Premier League Champion was happy to take part in this autograph session, to the delight of the Rouge et Noir supporters. And not only them...

The Danish national team goalkeeper was delighted with these first moments shared with his new supporters.
"I am very, very happy," he beamed. "It's incredible to meet everyone, it's great to see all these fans who have come out to see us." 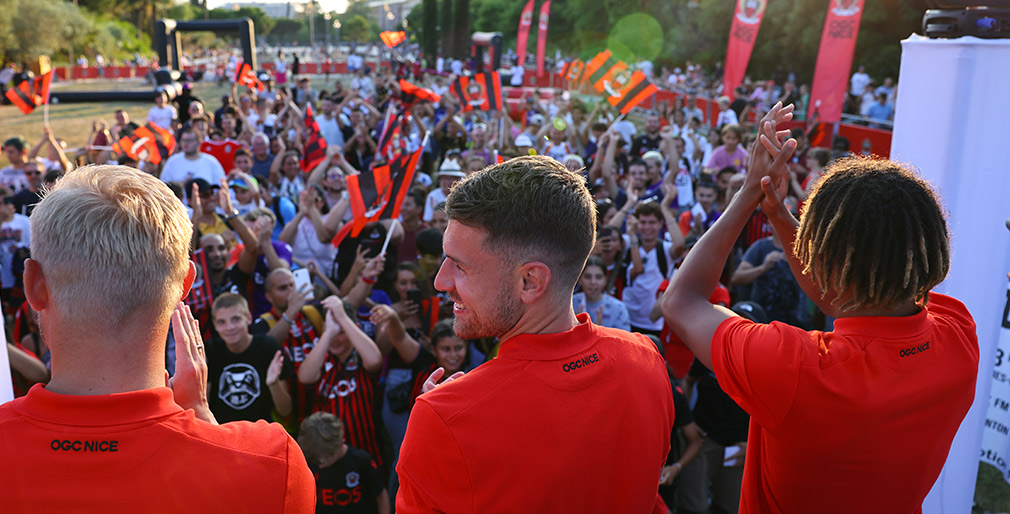 With the players gone, there were still a few minutes left to enjoy the many activities that provided something for everyone. Listening to the music provided by Radio Emotion's stage entertainment, the match circle saw fierce battles while bowling and tennis ball provided an opportunity to demonstrate technique and precision.

The pop-up shop was never empty either, proof of the enthusiasm for Lucien Favre's squad. To complete the outfit, the make-up stand was very popular with the youngsters.
Smiles for all, unforgettable memories and recruits filled with Rouge et Noir love. Everything is now in place ahead of the start of the season this Sunday in Toulouse!

The numbers from pre-season

The numbers from pre-season