Just got back from holiday having followed Nice’s first month of the campaign from a distance? With Lucien Favre’s men coming into the final two weeks of pre-season, here’s a little catch-up session for you.

WHAT SYSTEMS HAVE BEEN USED in THE FIRST FOUR GAMES?

Right from his first press conference of the summer, Favre revealed his affection for a 4-3-3 or a 4-2-3-1 formation whilst also pointing out that his team should be “able to adapt” in order to perform. 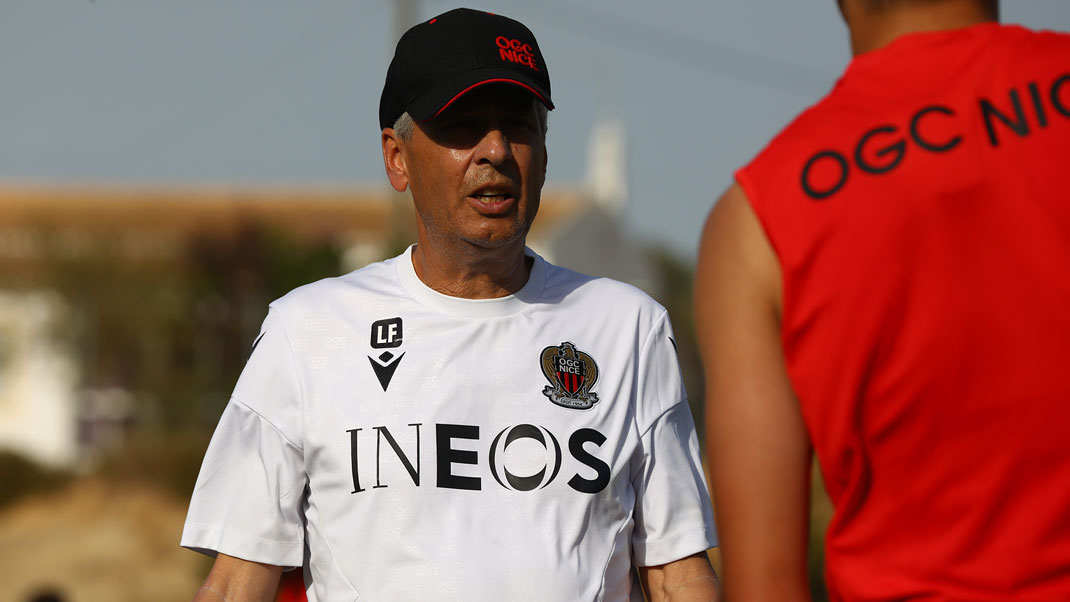 Both of these systems were used over the course of the first four matches of the summer. A third system was also sandwiched between them: a flat 4-4-2.

Le Gym began pre-season in a 4-3-3 formation against Cercle Brugge, then against Benfica. At the break in what was a tough test against the Portuguese side, the Swiss coach tinkered with his system, making a few notable changes: moving Hicham Boudaoui (who started the game as a defensive midfielder) over to the right wing, moving Lucas Da Cunha over to the left and bringing Amine Gouiri and Andy Delort closer together down the middle of the attack. Despite the rotation within the squad, it was in a 4-4-2 shape that Les Aiglons finished the 3-0 defeat to Benfica and started the 2-0 loss to Fulham.

The 4-2-3-1, meanwhile, was tried out against AS Roma. In that match, Alexis Claude-Maurice started as a number ten behind lone frontman Billal Brahimi.

SOME RETURN, SOME MAKE THEIR DEBUT

Two of Le Gym’s key elements and long-term injury absentees have earned themselves some game time again in the last month: Youcef Atal and Alexis Claude-Maurice. Having picked up a shoulder knock against Lens in April, Atal started off by returning to non-contact team training before coming back into match action during the training camp in Portugal, playing half an hour against Benfica and then two halves against Fulham and Roma. 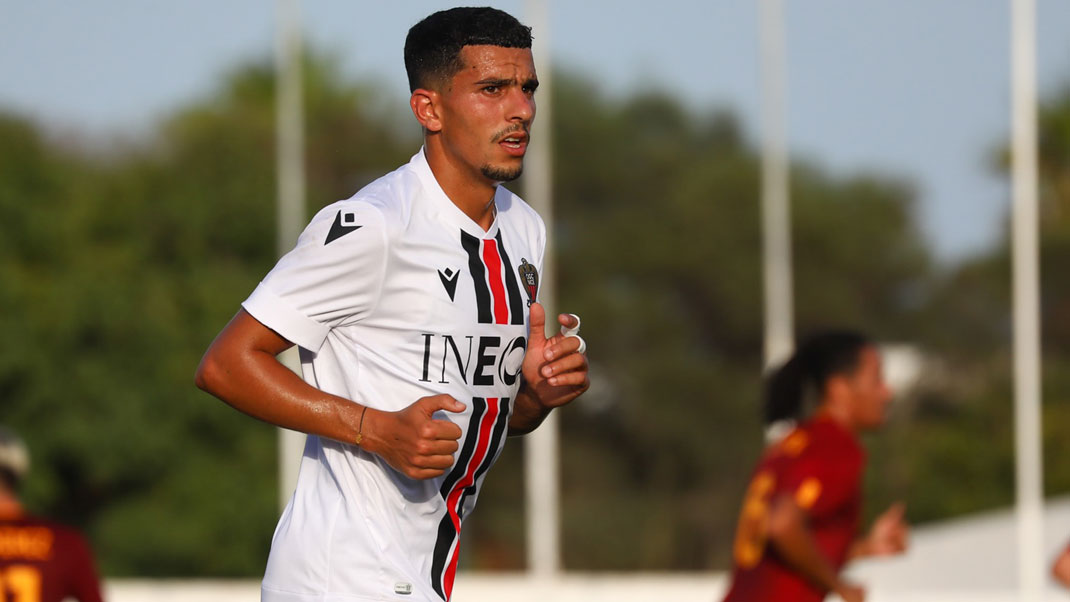 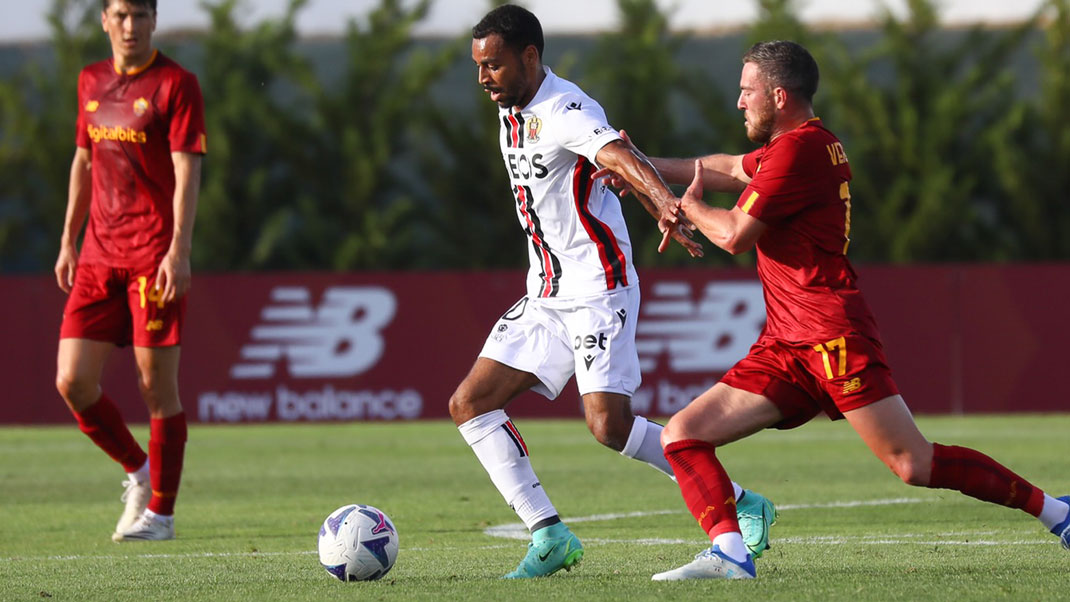 Claude-Maurice, meanwhile, has taken part in all four pre-season games so far, either on the left side of the attacking trio or as a number ten.

Both of these returns have been accompanied by several new faces. Having just arrived from Rapid Bucureşti, Rareş Ilie played his first hour for Nice against the winners of the inaugural Conference League. 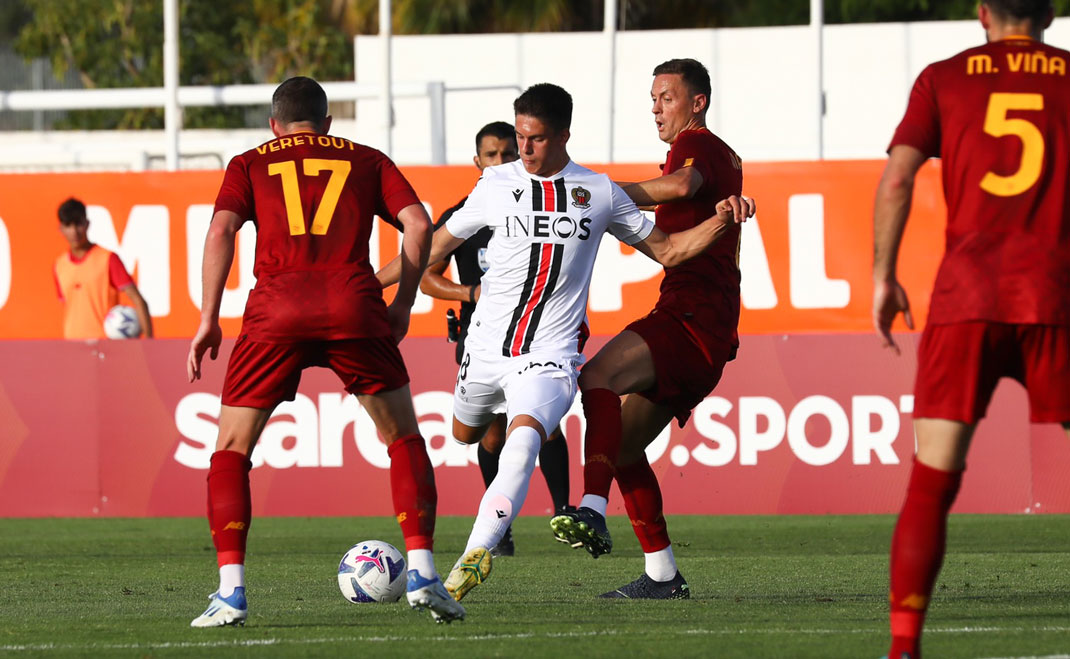 Fresh off the back of winning the Mediterranean Games, 17-year-old Badredine Bouanani joined the club this summer from LOSC’s academy. The young winger, who signed his first professional contract with Le Gym, has taken part in all four friendlies so far.

After scoring the team’s first goal of the summer, Andy Delort had to leave the field early against Fulham. No harm done for ‘Le Bison’, though, who is currently recovering, having been rested against Roma.

Having suffered with illness, Khephren Thuram joined up with his teammates in Portugal last Monday, slightly later than planned – as did Calvin Stengs – after the team’s clashes with Benfica and Fulham. The midfielder was also rested against Roma due to a muscle problem.

Boudaoui, who picked up a knock on the back, is the only player to have left the training camp early to receive treatment and work at the training ground. 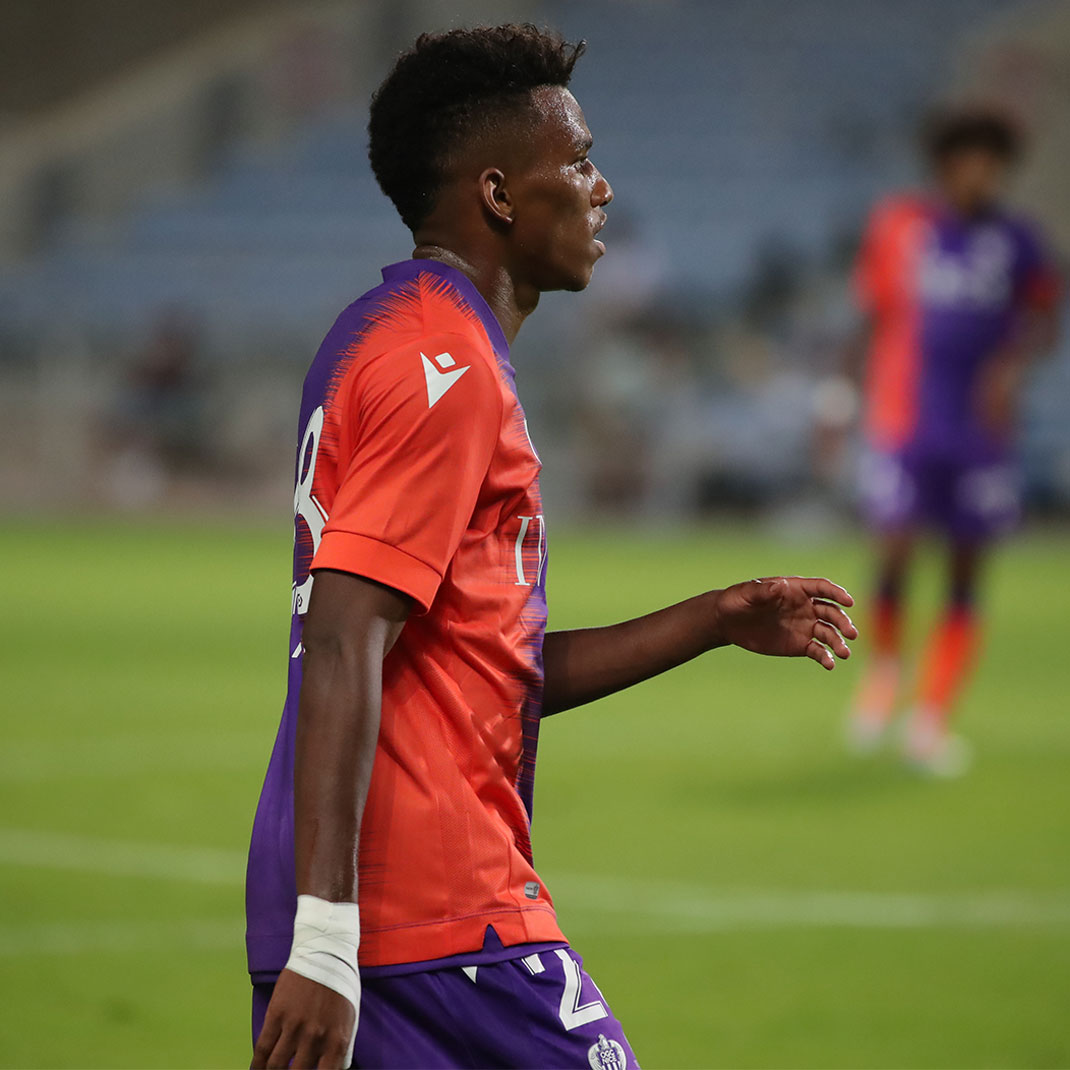 Les Aiglons will finish their pre-season this Saturday at the Allianz Riviera against Torino, with kick-off set for 17:00 CET. They will then get their Ligue 1 season underway at the Stadium de Toulouse on Sunday 7th August at 13:00 CET, before their first home game of the campaign, which is scheduled for Sunday 14th August at 17:05 CET, against Strasbourg.