Despite a lot of desire and an opener from Kluivert (31’), the Gym were beaten 1-3 by Lille at the Allianz Riviera and fall to sixth place in Ligue 1.

Despite all their efforts and a lot of desire, OGC Nice lost to Lille in front of 24232 spectators at the Allianz Riviera (1-3). Nice dominated the game in the first half, creating many dangerous situations but were put under pressure by Lille early in the second half. In the first half, Kluivert's shot hit the crossbar and Delort's header hit both posts. The match would have been quite different if these chances had found the net... Which the Dogues managed to do after the break.

Lille had the first chance of the game with a shot from Jonathan David. A few moments later, Melvin Bard, thanks to his very good challenge in front of Zhegrova, showed the solidity of the best defence in Ligue 1 and set the tone. And the Nice team gradually took control of the match and created dangerous situations. And before the crowd applauded in the ninth minute in tribute to Emiliano Sala, Boudaoui's cross from the right was narrowly touched by Jardim when Gouiri was well placed at the far post. The Gym tried to put the Dogues under pressure by playing down the right side and crossing. At the back post, Delort was on the receiving end of a cross from a very lively Boudaoui, the Gym's top scorer passed to Kluivert who saw his left-footed shot hit the crossbar.

Christophe Galtier's side had a number of chances. Lemina rose to meet Kluivert's well-taken corner but his header was off target, Jardim turned away Boudaoui's right-footed shot in the box after Gouiri's good effort.

Nice, playing high up the pitch, were going to make Lille crack under the pressure. Justin Kluivert met a perfect cross from Boudaoui with a half-volley in the box and opened the score for the Gym in a fantastic atmosphere (1-0, 31')! The Dutchman scored his sixth goal of the season with Nice. The enterprising Gym did not back down though and continued their dominance. Jardim pushed away Gouiri's powerful shot in the box and Delort's header from Gouiri's cross hit both posts. Lille's free-kick just before half-time was a problem for the Rouge et Noir, but they were in form control in their own stadium and went into the break with a lead.

A CLINICAL LILLE SIDE

In the second half, the Aiglons came back with the same attacking intent and a lot of desire. Gouiri's powerful effort from the edge of the area was on target but Jardim saved. Lille reacted well to the Gym’s intent. Benítez saved Onana's low effort. Seven minutes into the second half, Jonathan David's close-range effort after a cross from Weah put Lille back in front (1-1, 52'). On the hour mark, Jonathan David doubled the lead. First, the Canadian international met a cross and hit the post. Then he pushed the ball into the back of the net after Çelik's shot was saved by Benítez. The goal was initially disallowed for an offside position, but was then overturned by VAR (1-2, 60').

The Aiglons, less at ease than in the first half, had to fend off Lille's attacks. Lemina scrambled the ball away from Weah's cross in the box. Delort's shot and Todibo's volley from Bard's long ball lacked precision. At the end of the match, Gym, forced to react, attacked to try to come back. Brahimi crossed for Kluivert, who volleyed over from close range after a good break down the left wing. The unmarked Andy Delort's volley from Kluivert's cross went inches wide and Brahimi's powerful long-range effort flashed over Jardim's crossbar. In second-half stoppage time, from a counter-attack, Weah beat Benitez to seal Lille's victory with the third goal (1-3, 90+5)

The Aiglons will play their final match of the season in Reims next Saturday (21:00). A last step, a last hurdle to hope for a European place. 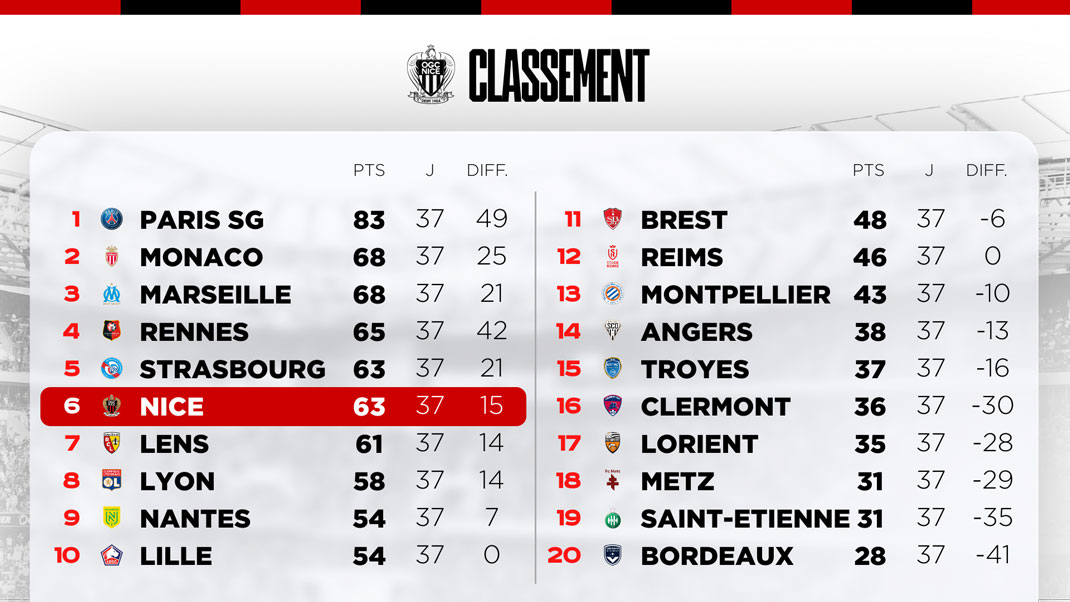