This Sunday, OGC Nice won in Bordeaux after a solid performance, in which they managed to create a lot of chances and take one of them (1-0). It was enough to keep them two points off the podium and regain 5th place in L1.

"It's a very important match for us. I see it as a semi-final," said Christophe Galtier in a press conference last Friday. It is clear that the Nice players heard their coach's message. A week out from the Coupe de France final against FC Nantes, the Rouge et Noir won in Bordeaux and are still in the race for Europe, two points off the podium. The game, the attacking situations, the defensive solidity: everything was in place this afternoon, although more efficiency would have allowed the Azureans to have a more peaceful afternoon...

CLEAR CHANCES IN THE FIRST HALF

Nice were in control of the game at the start of the match and took advantage of Bordeaux's defensive weaknesses. The Aiglons' high pressure troubled the Marine et Blanc. Kluivert created the first big opportunity of the match. The Dutch international pressed Costil and won the ball back, the striker crossed for Dolberg who took a shot from inside the area. Costil was beaten but Mensah, as a last line of defence, tackled the ball away and prevented the opening goal.

The Aiglons were very active when Bordeaux lost the ball, and the chances kept coming. Delort's close-range volley from Kluviert's cross was blocked by Guilavogui, Dolberg's right-footed shot from the edge of the area went inches wide and Khephren Thuram's header went wide of Costil's goal.

With a high line, the Gym put in difficulty the hosts with every attack but lacked precision in front of the goal. From a Nice throw, Delort had a shot before half-time but his attempt went wide. Despite dominating the game and playing well, Nice went back to the dressing room level with Bordeaux (0-0).

Daniliuc's team-mates - the Austrian was playing his 50th match for Nice - started the second half with the same attacking intentions and the same defensive solidity thanks to the Dante-Todibo partnership. After Kluivert's shot was blocked, Melvin Bard's half-volley into the box flew wide. Just before the hour mark, Kluivert's corner on the right was met by Delort, he passed to Thuram, who headed the ball in, but Costil made a reflex save to turn the ball out for a corner.

The Rouge et Noir finally saw their efforts come to fruition. After a one-two with Thuram, Bard raced into the area on the left and tried to make the difference but Lacoux clumsily turned the ball away to Delort, who was roaming around like a fox in the box, and fired home to open the scoring (0-1, 73'). With this advantage, Nice did not back down and continued to attack. Gouiri's right-footed shot from the edge of the area and Delort's diving header at the far post after a good cross from Gouiri both went wide of Costil's goal. Nice held on to the lead in the dying moments despite Bordeaux's attacks. The Azureans even came close to doubling their lead from a counter-attack led by Brahimi. Lotomba's shot hit the post and Brahimi's shot flew over the Bordeaux goal.

OGC Nice have the chance to add to their record at the Stade de France on Saturday. The Gym will face FC Nantes in the Coupe de France final (21:00). This is the last challenge for the club to win the cup for the fourth time (after 1952, 1954, 1997).

THE LEAGUE TABLE BEFORE THE END OF MATCHDAY 35 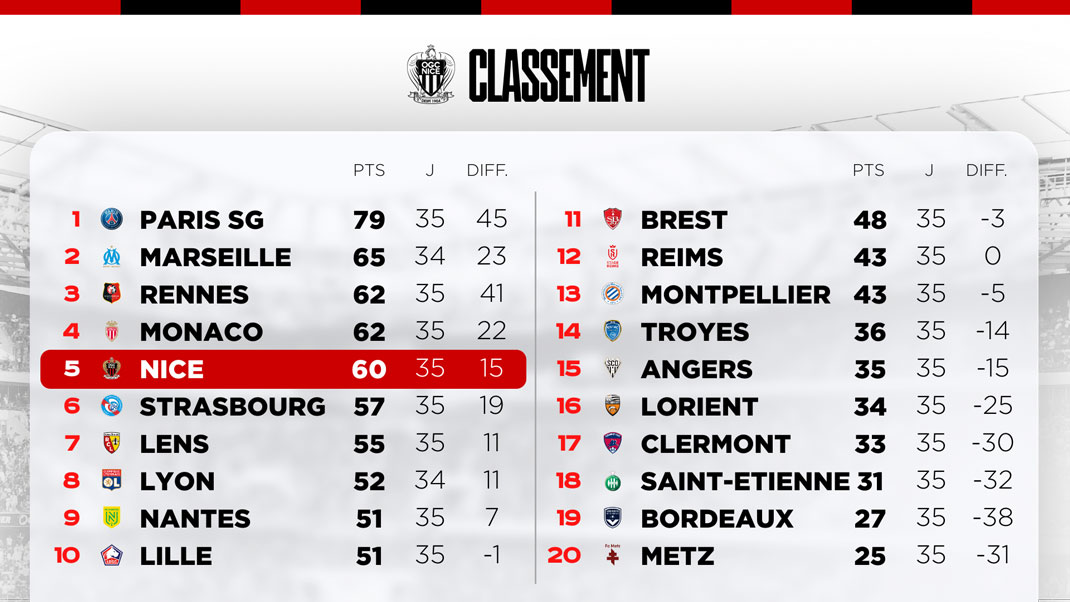