Three days after qualifying for the final four of the Coupe de France against Marseille, OGC Nice were beaten at Lyon on Matchday 24 of L1 (2-0). Deservedly, given the difficult match Les Aiglons faced and the strong performance from their hosts.

A TALE OF PENALTIES

Le Gym hadn't lost away from home since 17 October and a trip to Troyes. Yet this evening, it became a second consecutive Ligue 1 defeat, after last week against Clermont. Lacking energy and ideas, Les Aiglons, who had been brilliant in the Coupe de France, were caught out on Saturday against a quality side.

Summing up the first half as a tale of penalties could seem to be reductive, given that Les Lyonnais demonstrated superiority throughout the first thirty minutes. But the penalties were almost markers in the first 45 minutes. The one awarded to Lyon, at the very start of the encounter, after a Kluivert handled the ball when battling with Lukeba. Very harsh to say the least, and converted by Moussa Dembélé (8’) at the second time of asking, after his first effort was parried by Benitez, turned home by Paquetà, but cancelled out for encroachment from the Brazilian.

Then the one not given on Khephren Thuram in the 33rd minute, despite everyone believing there should have been. At the start of the move, a lively Justin Kluivert crossed for Le Gym's number 19, once again starting on the left of Christophe Galtier's 4-4-2 (with just two changes made from the starting 11 that faced Marseille on Wednesday: Benitez and Lemina). In the air in the box, Thuram was knocked off balance by Faivre, but Mr. Buquet was unmoved, in the same way as VAR, despite the error appearing to be clear.

Those were the main talking points from the first half. To cover the others: they were nearly all in Les Gones' favour in the first thirty minutes. The home side were set-up in a 4-2-3-1, with their recruits (Ndombélé  and Faivre) and international players (Toko Ekambi, Paquetà) returning to the squad. With more bite and looking fresher, Peter Bosz's side created a series of chances: Ndombele's strike flew over the bar (15’), a lightning attack that was thwarted by Dante on the edge of his box (18’), a cross to the near-post from Faivre that Todibo cut out (23’), Benitez's stop to deny Toko Ekambi (30’), an effort from Emerson that Benitez turned away Benitez (39’)... The home side even thought they had doubled their lead on 40 minutes, when Thiago Mendes, playing at centre back, headed a Faivre corner towards goal. Amine Gouiri saved his side, on his own line, with an impressive defensive header. And after that, the final five minutes of the first half proved that there was still something up for grabs for our Aiglons. 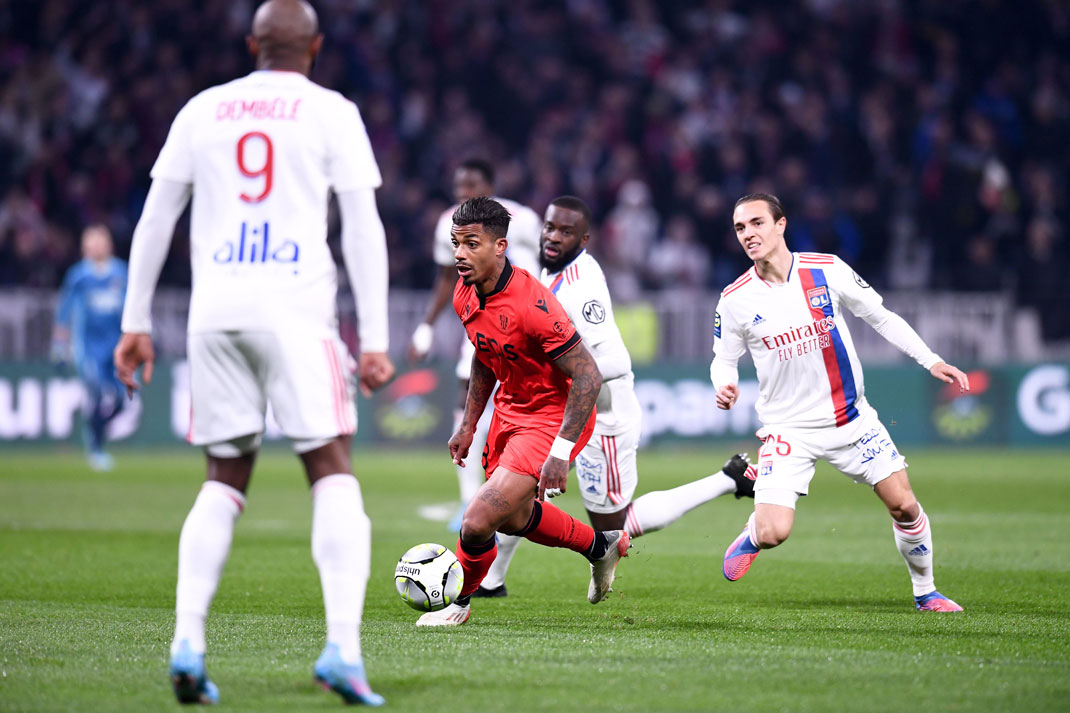 Lemina battled with Paquetà, broke through and crossed for Delort, who preferred to play to Gouiri rather than trying his luck, but was denied by an impressive defensive block (45’). Then  Kluivert, always difficult to contain, found Delort in deep, but was beaten to it by the on-rushing Lopes (46’). You can add to that the first chance of the match, which fell to Gouiri, but who was equally beaten to the ball by Lopes after Schneiderlin had stolen the ball from the feet of Caqueret. This just went to demonstrate what Coach Galtier had said before the match, when discussing OL's attacking potential and the defensive errors they often struggle with.

To make the most of them, Le Gym were going to need to bring more. Across every blade of grass. More accuracy, more defensive solidity, more energy in the transition. But they didn't manage to do so. And in the same way as the first, they conceded a second goal early on in the second, with Toko Ekambi mopping up at the back post after Ndombele's initial effort (2-0, 52’).

With their backs against the wall, Coach Galtier tried to bring on fresh blood before the hour-mark, throwing on Brahimi and Rosario to replace Lemina and Gouiri. But Lyon continued to attack the Nice goal, wave after wave, minute after minute. 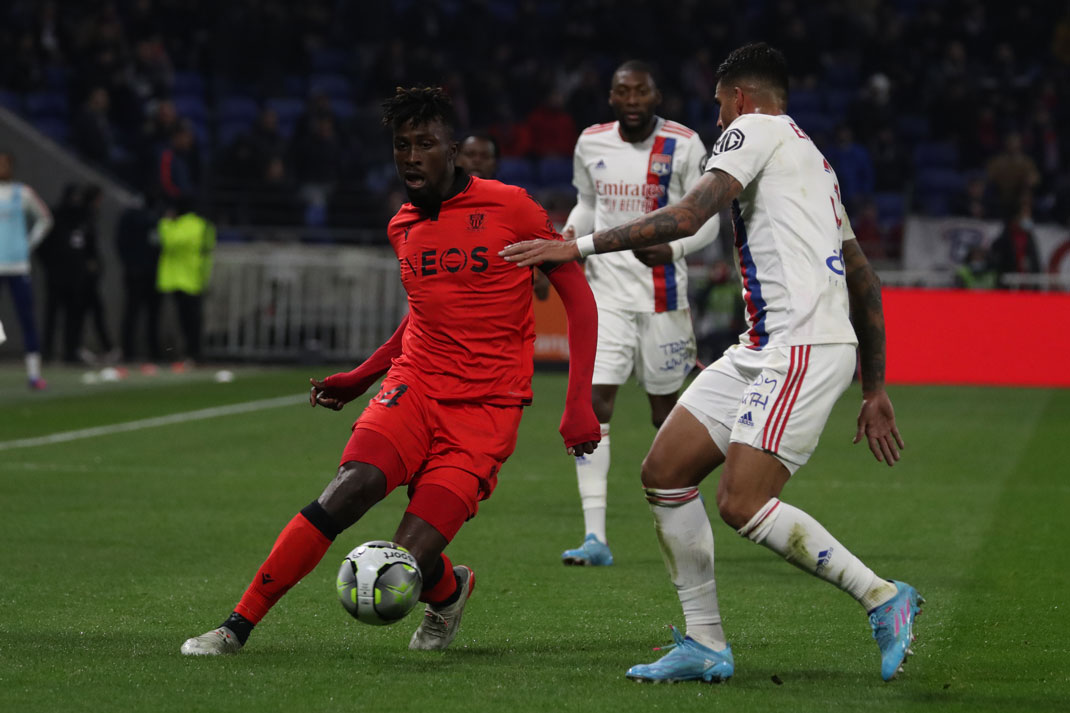 Guessand and Lotomba came on for Thuram and Daniliuc before the 65th minute, and then it was Claude-Maurice's turn to come on. But this time, there was to be no magic. Le Gym continued to struggle and were troubled by Les Rhodaniens's technique and accuracy. As the minutes went by, they gave up less chances but didn't create many either. With fifteen minutes to go, Guessand's header was dealt with by Lopes, and then Benitez came out on top in his duel with Kadewere. The Argentine then dealt with a smart effort from Paquetà at the end of the 90 minutes.

Les Aiglons will have to pick themselves up ahead of next Sunday, when they host Angers at the Allianz Riviera (M25, kick-off at 1pm). 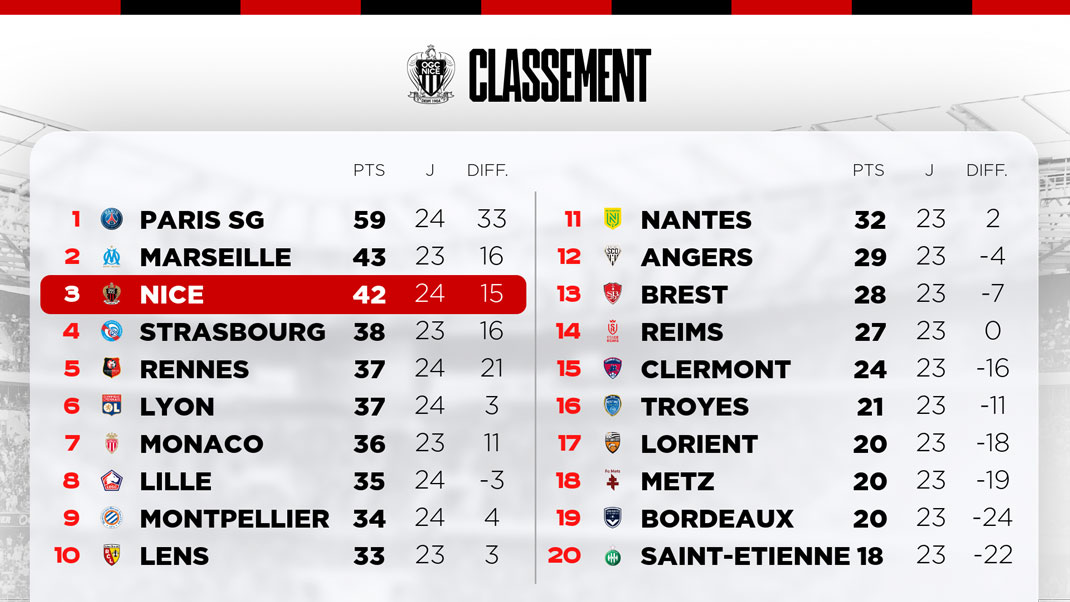 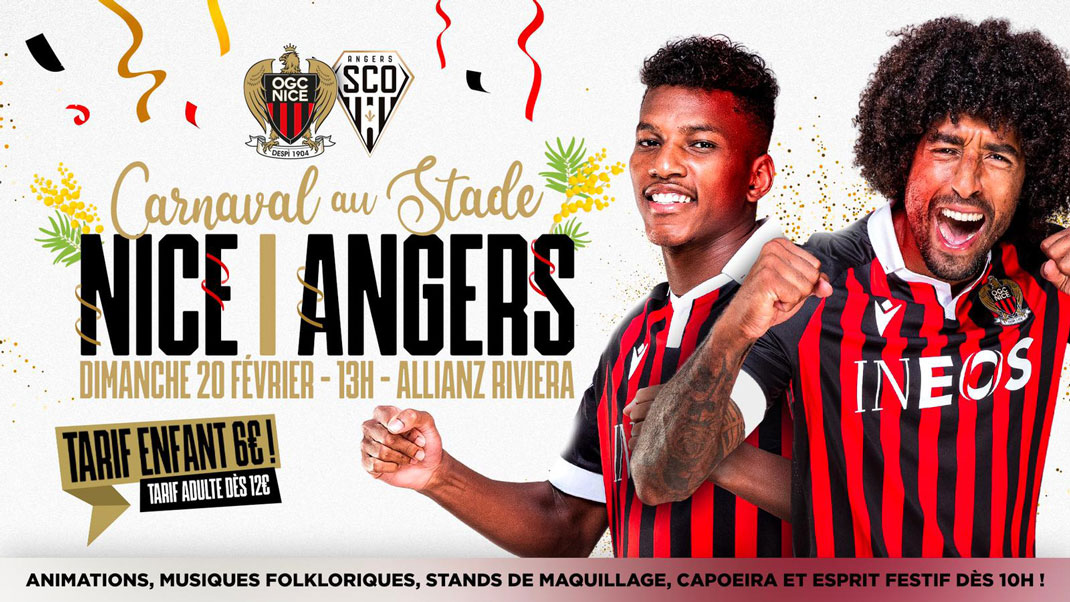 Todibo, Crédit Agricole Aiglon of the Match for Lyon - Nice

Todibo, Crédit Agricole Aiglon of the Match for Lyon - Nice

Galtier: "That's what the very highest level is about"

Galtier: "That's what the very highest level is about"

The 23 Aiglons for Lyon

The 23 Aiglons for Lyon