In the opening game of Matchday 21 of Ligue 1, OGC Nice dominated FC Nantes in a frenetic encounter. After controlling the game for the first hour, Les Aiglons were able to dig deep to hold onto their fourth consecutive victory. Having taken the lead thanks to a penalty from Dolberg (21'), they reacted after Girotto's equaliser (45') and secured the victory thanks to a superb goal from Thuram (55'). With another three points on the board after this fourth league win on the trot, Nice boast 39 points and ensure they remain in second place in Ligue 1, as they await the results of the rest of the matches this weekend.

A story of two set-pieces

Against a compact and deep Nantes block playing with five at the back, Le Gym, with Jordan Amavi making his return for Les Rouge et Noir (2435 days after his last appearance), brought intensity from the get-go. In their duels, runs and meaningful passing, Les Azuréens showed desire to quickly put the visitors under pressure. With the centre of the pitch largely dominated by the Nantes defensive trio, the home side tried to attack down the wings. Very quickly, Justin Kluivert found Kasper Dolberg who couldn't quite get enough on his header (9’). It was only inevitable that after being put under pressure by Le Gym and being forced to run after their hosts, Les Nantais would be forced into a mistake. From a corner, Dante's header at the back post was blocked by Bukari's hand. Mr. Buquet awarded a penalty to Les Rouge et Noir, which Kasper Dolberg made no mistake with, smashing the ball into the middle of the Nantes goal (1-0, 21’). 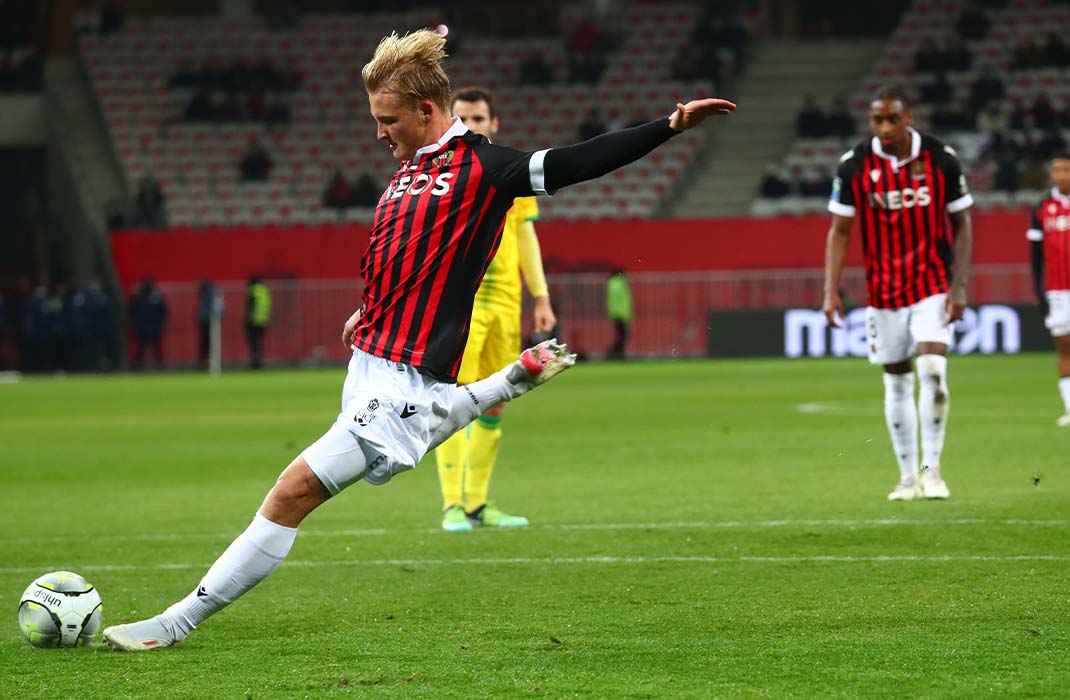 A goal that came just a few minutes after the away side's first attack of the game, which was well denied by Walter Benitez, who had rushed out to throw himself at Kolo-Muani's feet (16’). The France youth international caused problems for Christophe Galtier's side. With his speed and link-up play with Osman Bukari, he won a free-kick for his team. Struck powerfully at goal by Andrei Girotto, it allowed Les Canaris to equalise with just seconds left to play before the break (1-1, 45'). The centre back's effort got the better of Benitez down low to his right and left the match in the balance, despite the home side's domination.

After ten minutes during which Nantes played with a little more urgency, Nice quickly snuffed any chance of a revolt with a top-class move. At the beginning of the move, Thuram drove forward, pierced through the Nantes block and found Gouiri on the edge of the box. The one-two between the men saw the midfielder through one-on-one and he came out on top with a smart left-footed effort (2-1, 55'). His second goal in Ligue 1 this season, his fourth goal with Le Gym and his second against Les Canaris. 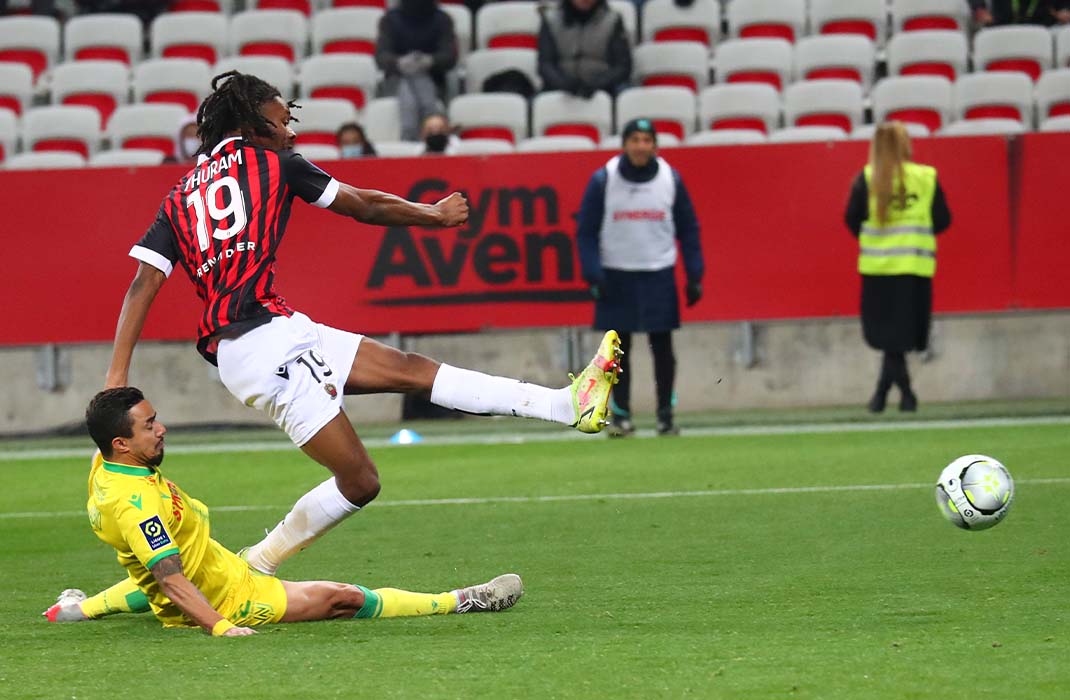 With the lead secured, which would allow them to consolidate their spot in second place in the league, Nice dug deep against Les Nantais who kept the ball for the final quarter of an hour. Coach Galtier took advantage in order to bring on fresh legs and give his side a second wind. Les Aiglons ensured they remained tight and looked to attack on the counter, but Boudaoui was denied by the Nantes defence (84'). With another victory, a fourth on the trot, Le Gym maintain their spot between Paris and Marseille and will be able to sit back and calmly watch the rest of Matchday 21.

Aiglon of the Match 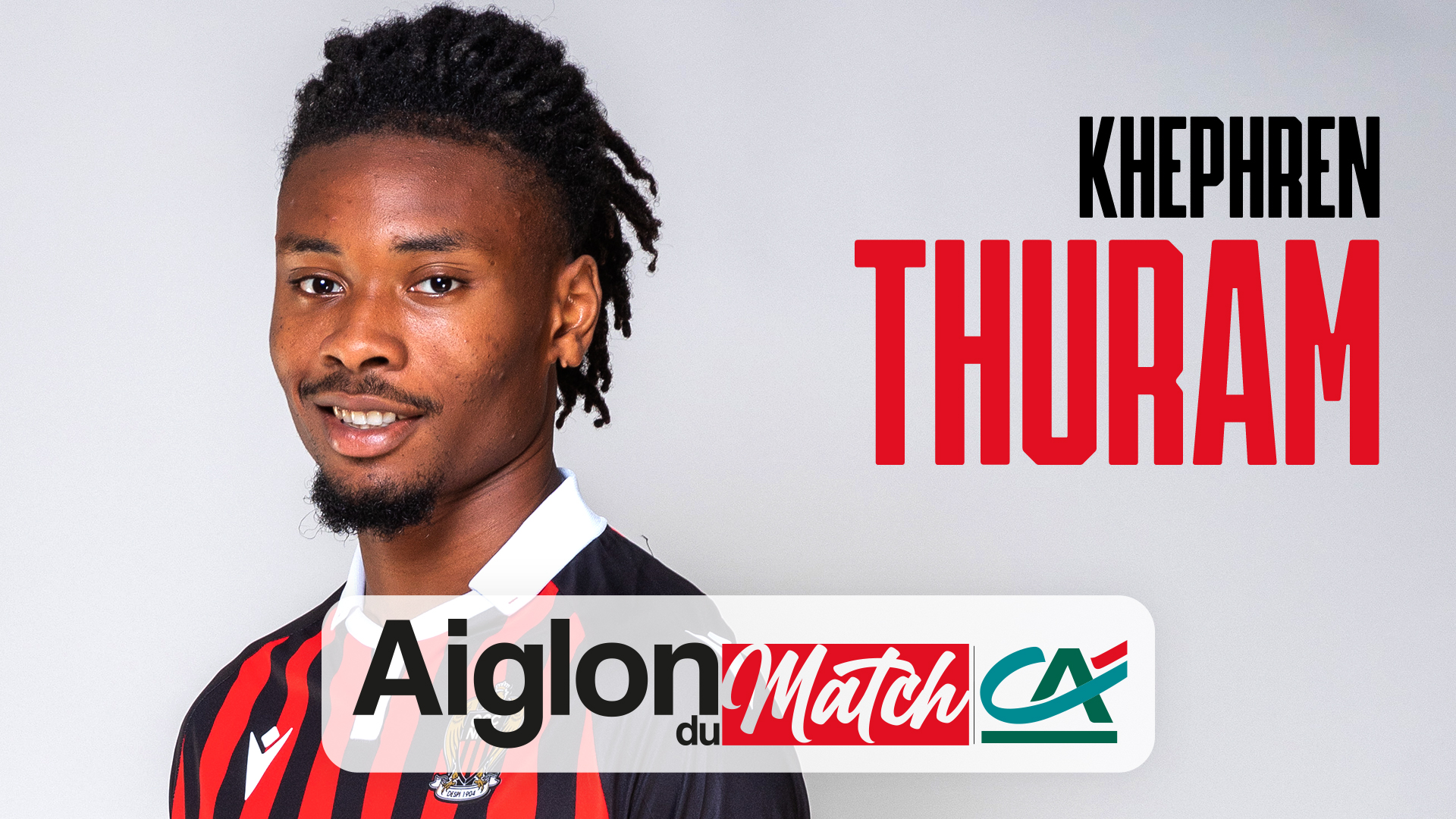 Les Aiglons will be in action at FC Metz next Sunday at 1pm on Matchday 22 of Ligue 1. A match that you will be able to follow on the OGC Nice media channels and that will be broadcast on Prime Video. 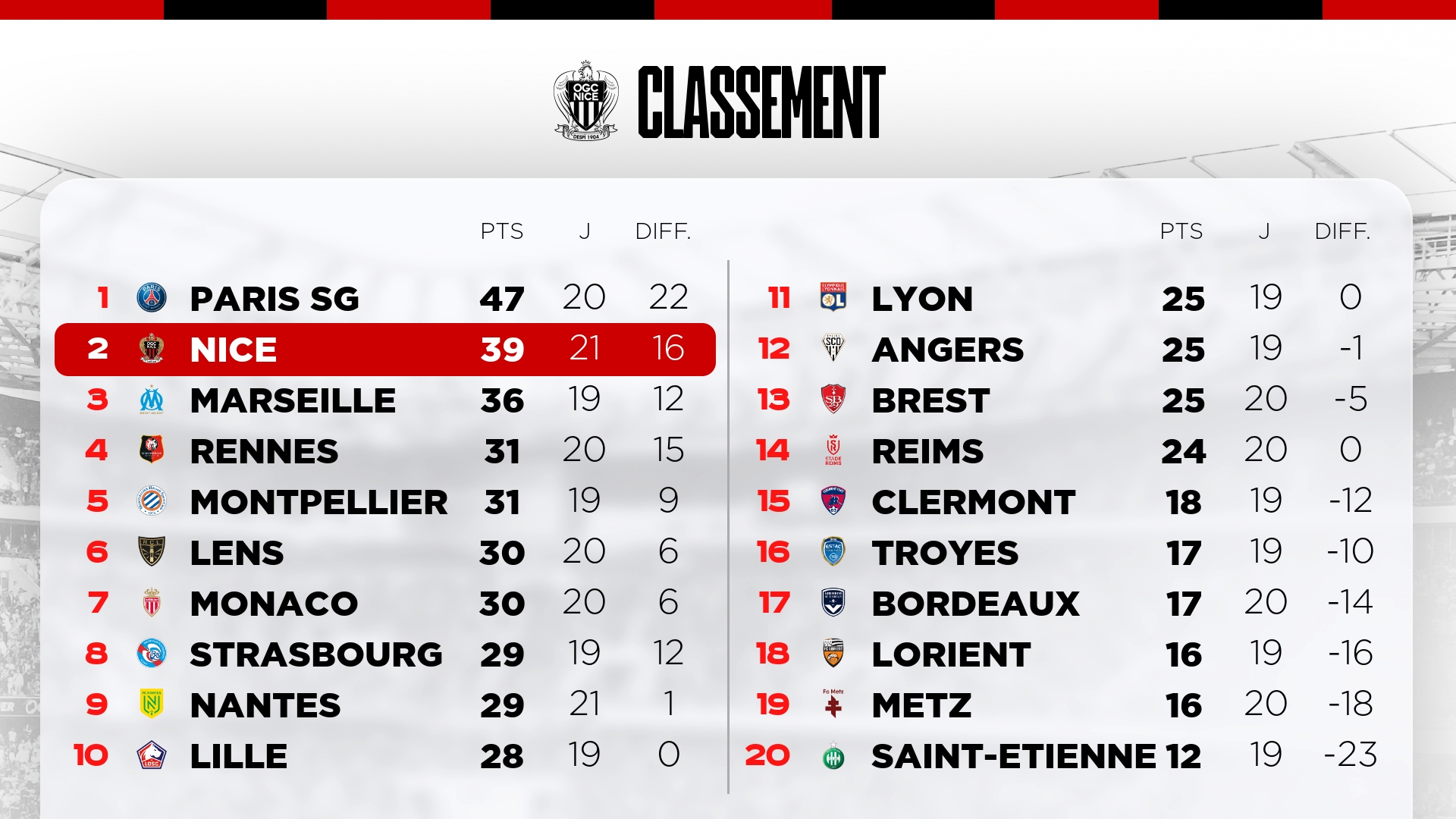