OGC Nice, who have lost just once in eleven games this season, put in a convincing performance to earn a fine victory and move up just behind the Stade Rennais in the table (1-2). With Dolberg scoring and assisting, and Atal scoring another wonderful goal, the Aiglons, who were able to keep their cool at the end of the game, are now provisionally back in third place in Ligue 1 despite Bourigeaud's late goal. They are now just one point behind their opponents.

DOLBERG PUTS THE GYM ON THE WAY TO SUCCESS

Rennes took control of the game in the first quarter of an hour (68% of possession), but the Aiglons picked up the pace after a timid start and took advantage of Youcef Atal's presence on the right flank to create some danger in the final third. The Azureans were more active, and found the breakthrough from a set piece. From a corner on the left, captain Dante was elbowed in the air by Baptiste Santamaria. Kasper Dolberg then converted the penalty, by slotting the ball into Alfred Gomis' goal (19', 0-1). 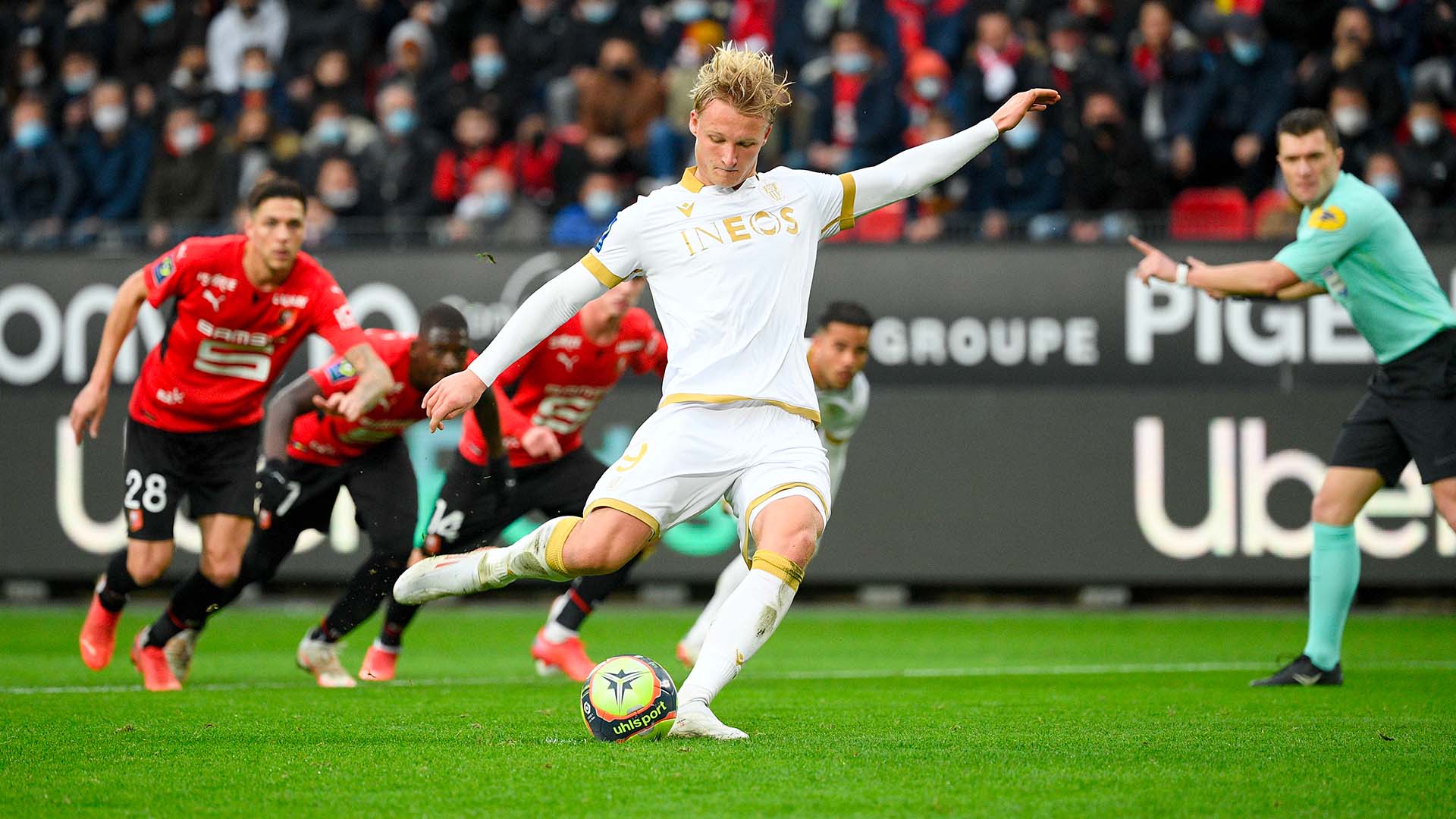 Rennes had to react quickly to one of Nice's first attacks, but they were unsuccessful. The home side thought they had scored from a corner when Nayef Aguerd's header hit Walter Benitez's post. The home side were not to be denied, however, as a succession of balls into the box saw Benitez's defence stand firm and repel the opposition's attempts. The Aiglons were resilient at the back, but they were also sharp up front, with Justin Kluivert playing on the left wing. The Dutchman got the better of Warmed Omari with a neat dribble and crossed for Dolberg at the near post. The Danish forward's deflection allowed Gomis, who made a fine intervention from close range, to shine, while Hicham Boudaoui's follow-up effort was blocked (33'). Before returning to the dressing room, Boudaoui and Dolberg were again on show. The former found the latter who controlled, turned and sent a powerful shot over Gomis' bar (45+1').

ATAL GETS THE SECOND, THE AIGLONS HOLD OUT AGAINST RENNES

In a similar situation, Dolberg showed his passing skills this time after the break. After turning and opening up space, the number 9 slipped a good ball to Atal, who was sent down the flank. The full-back then fired a first-time shot that gave Gomis no chance and doubled the Aiglons' lead (51', 0-2). A rocket. Dolberg was dangerous again at the end of a quick transition. His shot grazed the post (54'). 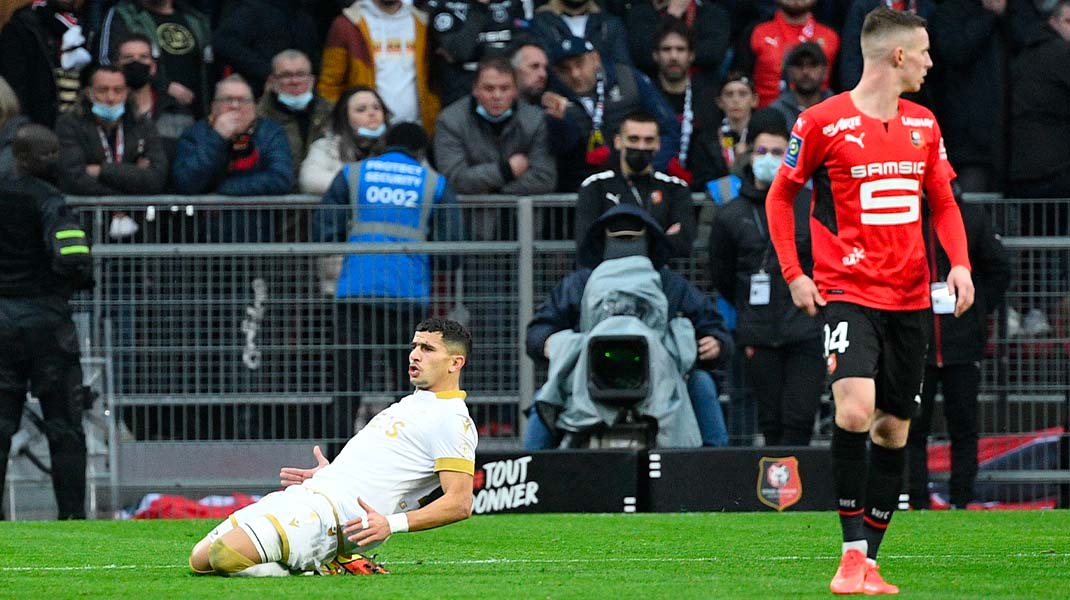 The alert did not stop the hosts who took advantage of a good opportunity to score.

Adrien Truffert found Lovro Majer at the other end and took advantage of the space in front of him to send a cross into Benjamin Bourigeaud, who was quickest to beat Benitez (60', 1-2). The Aiglons were in the ascendancy for an hour, but then they were forced back.  Christophe Galtier brought on Flavius Daniliuc, Calvin Stengs, Evann Guessand, Khephren Thuram and Morgan Schneiderlin, and then switched to a 5-4-1 formation. In the end, the Gym did not succumb, thanks to great defending, and secured a precious win that took their total points in Ligue 1 to 30.

Les Aiglons will be away again next Sunday, this time in the French Cup. They will face SO Cholet in their first match (18:20). 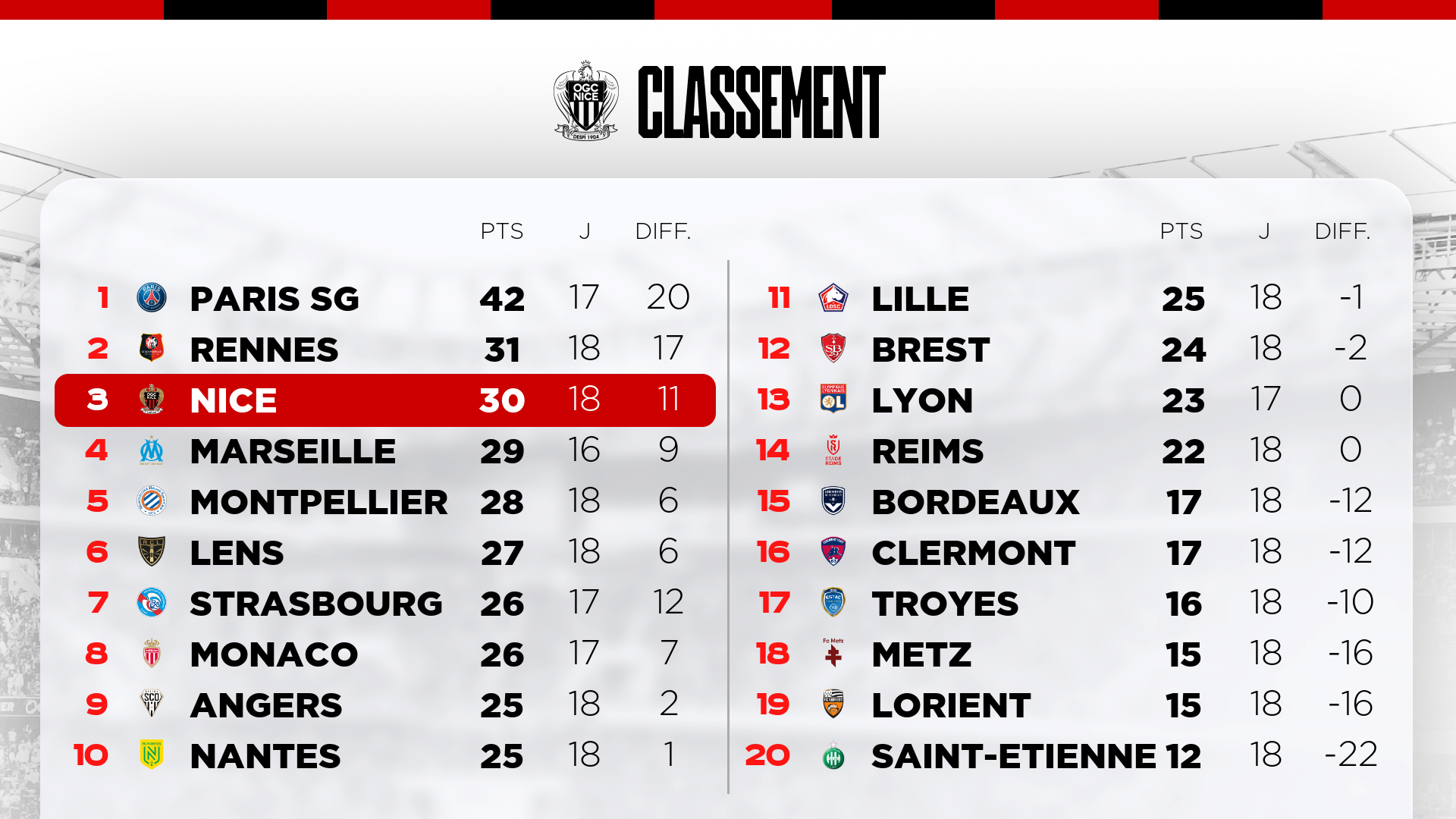