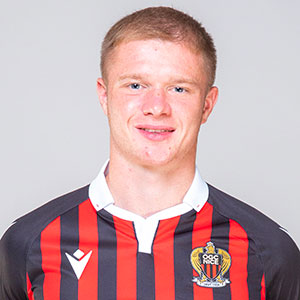 After coming through the ranks at Lyon, where he faced Les Aiglons during pre-season in 2020, Melvin Bard made his professional debut in December 2019, during a match against Nîmes, before making 18 appearances (including 14 in L1) during the 2020-21 season. His performances for Les Gones opened up the doors to the France youth teams, all the way up to the U21s in September 2020. In the summer of 2021, he featured in the Olympic Games in Tokyo and signed for Le Gym at the same time.

The defender from Ecully wore the Nice shirt for the first time on 8 August 2021 on Matchday 1 of Ligue 1 against Reims (0-0). He then went on to appear on 37 occasions across all competitions during the season. On his left wing, Melvin Bard demonstrated his defensive quality but also his attacking potential, picking up two goals and two assists.

Le Zap'Gym: Tickets for the final, Nice in red and black and the match at Lens

Le Zap'Gym: Tickets for the final, Nice in red and black and the match at Lens

Bard: "I adhere to the project"

Bard: "I adhere to the project"

Agreement in principle for Melvin Bard

Agreement in principle for Melvin Bard