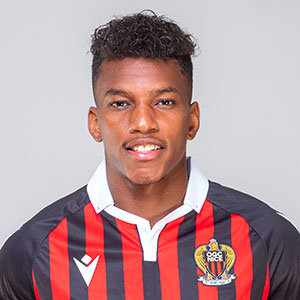 After coming through at Paradou FC like Youcef Atal, Hicham Boudaoui was the club's last summer 2019 signing.

He made his senior debut on 6 January, 2018, against USM Alger, going on to make seven appearances that season before coming into his own in the following campaign. He scored once and had two assists in 30 league games in 2018/19, and was called up by Algeria coach Djamel Belmadi for the victorious Africa Cup of Nations campaign, playing in the last group game against Tanzania and the Last 16 win over Guinea.

He made his Ligue 1 debut in the derby at Monaco on 24 September, 2019, and scored his first goal in the 3-0 win over Toulouse, going on to make 13 appearances that season. Used on the right wing, he was named Young Player of the Season by Nice fans captivated by his pace and dribbling. Used in a more central role in 2020/21, Boudaoui showed he could be just as important, scoring three times in 29 appearances. Named the club's top young player once again he also finished third in the overall vote.

In 2021-22, often used on the right wing of Christophe Galtier’s 4-4-2, Hicham Boudaoui went from strength to strength and played 33 matches across all competitions, during which he scored 3 goals.

Boudaoui, first winner of the season

Boudaoui, first winner of the season

Hicham Boudaoui is your Crédit Agricole Young Aiglon of the Year

Hicham Boudaoui is your Crédit Agricole Young Aiglon of the Year