Welcome to the Gym museum

On 4 July 2014, the "Café des Aiglons", otherwise known as the Gym Museum, was officially inaugurated. This was the culmination of two years of work by Virginie Rossetti (OGC Nice's communications and brand director) and Nicolas Bernard (deputy communications and brand director) with the ministry to ensure that this space entirely dedicated to the club's history was created at the Allianz Riviera.

It was a long process of collecting, listing and also convincing supporters and collectors to contribute. The result is worthy of these efforts. OGC Nice is now one of the only French clubs to honour its memory in this way. This temple of the rouge et noir culture was created in the year of the club's 110th anniversary and is a magnificent anniversary gift.

What is the Café des Aiglons? 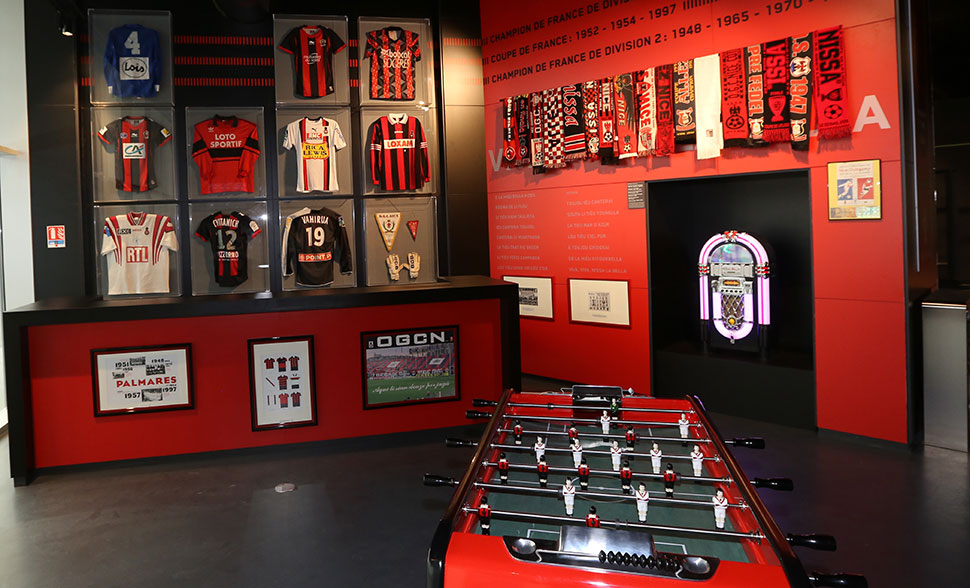 What can you find there?

When you enter, you are immediately in the mood. The walls are red and black and bear the words of the Club and the city's anthem "Nissa la Bella", the Gym's achievements and the names of nearly 800 players who have worn the colours of OGC Nice, as well as photos of teams from different periods in the history of a club that is more than a century old.

Behind the bar, the jersey corner: shirts from 1983 to the present day are on display. Among them is that of the first striker in the history of the Allianz Riviera, Dario Cvitanich, against Valenciennes on 22 September 2013. Thierry De Neef's shirt from the French Cup final on 10 May 1997 is on display, alongside the gloves worn by Bruno Valencony, who scored the decisive goal in the penalty shoot-out at the Parc des Princes that evening. 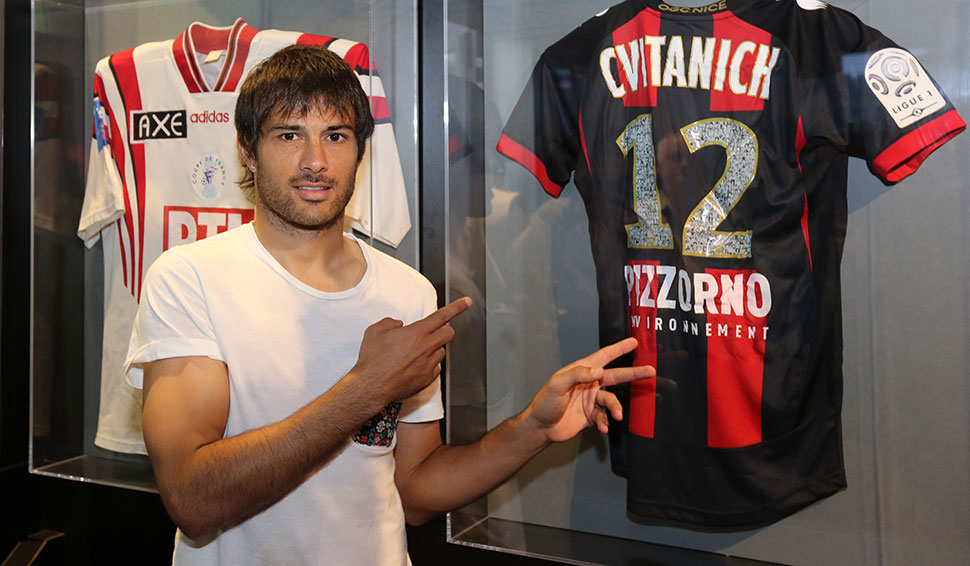 In the windows, the pennant of the French Cup final lost in 1978 as well as the 2006 Coupe de la Ligue finalist trophy do not prevent the Gym's glory hours from featuring prominently.  The three French Cups won by OGC Nice in 1952, 1954 and 1997 are displayed alongside the ball from the Nice-Real Madrid match given to Vic Nurenberg when he scored a hat-trick in the ¼ final of the European Cup at the Stade du Ray.

The touch table takes you back to the unforgettable moments of the Côte d'Azur club. When you look up, a video documentary retraces the key Aiglons dates.

On the other side, the Café des Aiglons pays tribute to the Gym supporters through an exhibition of their favourite objects: the scarf.

Designed in the manner of a "Café des Sports", which is always being enriched with new items and new collections, the Café des Aiglons also has tables, a jukebox and a table football. Even the table football players are dressed in Gym clothes! The tables are showcases containing match tickets, licences of past players, old photos and press cuttings. The jukebox broadcasts radio reports, supporters' songs, and of course, the OGC Nice anthem: Nissa la Bella.