Victory at the death for Le Gym

A last-gasp goal from Khéphren Thuram against Troyes (1-0) moved Nice provisionally up to fifth place in Ligue 1, two points off the podium.

Just a few days after the defeat in Monaco, the Gym had to bounce back this afternoon against Troyes. It was a case of recovering to stay near the top L1 and to stay in the race for a breath-taking battle for Europe. Nice won the game in the final moments, with Thuram's close-range right-footed shot sending the Allianz Riviera into raptures. 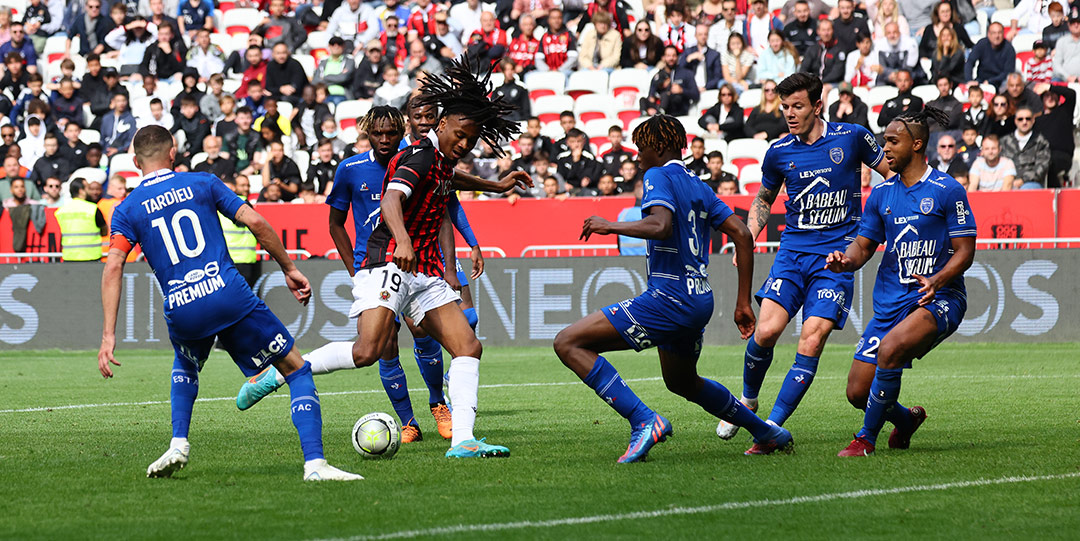 A special victory in tribute to Dédé Donati, a historic member of the club who died this week.

From the beginning of the game, Nice played high and their pressure troubled the already struggling Troyes. Thanks to some good team moves, the Gym were dangerous against a visiting team that sat back in defence. After a magnificent sequence that dazzled the Allianz Riviera, Amine Gouiri beat two defenders but his effort went just over the bar. Dolberg's attempt a few minutes later flew over Moulin's net. Nice continued to create danger working collectively. Rosario found Delort, who chested down the ball perfectly for Gouiri, but the French U21 international's powerful shot went wide.

However, on the half-hour mark, ESTAC fought back and tried to find an opening on the counter-attack, taking advantage of the space in the home side's defence. Benitez saved Kouamé's long-range shot and Ripart was denied a goal for an offside. Christophe Galtier's team, after 10 minutes of uncertainty, went straight back on the attack with two clear chances from Dolberg. The Dane crossed perfectly for Andy Delort who headed the ball into the box but it went just wide of Moulin's goal.

Nice pushed forward in the final moments of the first half to try and score. Gouiri played a beautiful pass with the outside of his right foot to Kluivert. The Dutchman controlled the ball with his chest in the box, alone against the Troyes goalkeeper, but his shot was turned away for a corner. Despite a first half in which they had the best chances, Nice returned to the changing rooms with the scores level against a Troyes side who were not ready to surrender (0-0).

Les Aiglons started the second half as they had finished the first: on the offensive. Delort and Dolberg's shots were both blocked by the visitors' back line. Delort again, on the left side of the box, saw his powerful right-footed shot end up in the side netting. But the Troyens remained faithful to their game plan from the first 45 minutes and were trying to take advantage of the spaces, with Benitez collecting a shot from Kaboré. Rather than just holding on, ESTAC began to multiply their attacks, albeit without any clear chances, leading to a feeling of uneasiness on the Plaine du Var.

Coach Galtier decided to send on some fresh legs and introduced Billal Brahimi and Khephren Thuram. The two Aiglons made an impact immediately. Thuram sent Brahimi down the right, the French-Algerian crossed and Kluivert headed into the box but his effort failed to trouble Moulin. The ball did not want to go into the Troyen net. Ten minutes before the end of normal time, Dante passed to Guessand after a Brahimi free-kick. The French striker headed the ball towards goal but Moulin continued his fine performance and pulled off a save. Four minutes later, after a scramble in the Troyes box, Daniliuc saw his effort go wide. The Austrian defender also had a cross pushed away by N'Jo in the area but the referee did not award a penalty. Then, the deadlock was finally broken by Khéphren Thuram. The Nice man opened the scoring and released the Allianz Riviera with a right-footed shot from close range after Guessand's pass in the area. Benítez saved all three points for the Gym by pulling off a save from Camara in the dying seconds.

After this win, the Gym have four matches left in the league to finish as high as possible in the standings. Next Sunday, Nice will travel to Girondins de Bordeaux (17:05), one week before the Coupe de France final against Nantes.

The highlights of the victory against ESTAC
0/25

Andy Delort: "Mentally, you can count on us"

Andy Delort: "Mentally, you can count on us"

Galtier and the Gym's thoughts with priest attacked in Nice

Galtier and the Gym's thoughts with priest attacked in Nice

The squad for Nice - Troyes

The squad for Nice - Troyes

Injury report ahead of Nice - Troyes

Injury report ahead of Nice - Troyes