A Gym with the heart of a lion!

OGC Nice were more energetic than their opponents and secured an incredible victory over Lyon this Sunday afternoon (3-2, Matchday 11 of Ligue 1). The Aiglons, urged on by their fans, dug deep to come back in a crazy end to the match (3-2)! What an end to the game!

At lunchtime, it was a big clash for the Aiglons on Sunday. Three weeks after their last home game, OGC Nice hosted Olympique Lyonnais as part of Matchday 11 of Ligue 1. The match was a top-of-the-table affair between two teams with the same number of points and as the rouge et noir fans were back in the stands after two matches behind closed doors. In the end, it was a game of two halves. Against an in form Lyon side the Aiglons, who had more chances than the visitors, failed to score before completely turning it around in the final moments. Still 0-2 down at the beginning of the last ten minutes, Christophe Galtier's men scored three goals in the final stretch thanks to Atal, Delort and Guessand! And the 24,519 Nice fans in the stands erupted!

The game got off to a slow start in the Côte d'Azur sunshine, with Lyon putting their foot on the ball from the off and trying to take advantage of their possession to find gaps in a well-organised Nice block. But the Aiglons set about protecting their area as a team. However, after a first warning from Lucas Paquetá (8'), Amine Gouiri's ball led to Andy Delort having a shot (11'). The Algerian created another chance and forced Anthony Lopes into a save after good work from Boudaoui. From then on, Lyon tried to breakthrough with quick transitions. They were unable to find a way through and played longer balls. One of them found Toko-Ekambi in between Daniliuc and Todibo. After a good effort pushed away by Benitez, he gave his side the lead (35', 1-0). Despite a quick reaction, neither Delort (35') nor Dolberg, twice, got the Gym get back into the game before the break (40', 45')

At the start of the second half, there were fewer chances. Nice were forced to play and defend in their own half of the pitch and tried to make inroads on the break, notably through Thuram, who had a shot blocked (63’). Struggling to gain a foothold, the Gym suffered from Lyon's control of the game and ended up conceding a second goal through Houssem Aouar (68’, 0-2). But the Aiglons continued to believe in their chances and looked dangerous in the chances they created for themselves. Youcef Atal came off the bench and, after a fine piece of work on the right, he unleashed a powerful left-footed shot that finished under the bar (82', 1-2). The fightback was on. The tensions in the Lyon team were hight and Tino Kadewere was given a red card for a terrible foul on Bard (85'). The visitors then conceded a penalty after a lovely little nutmeg from Atal, which Delort took. The Algerian was rewarded this time for his activity and the constant danger he brought when he wrong footed Lopes (88', 2-2). It wasn’t over for Nice, who were always on the attack. A man up they were fighting for every ball, pushed on by Atal’s introduction. Atal was at the start of the final chance of the game, at the end of added time, when Evann Guessand coolly slotted home the winner. The striker, who started at the Gym, scored the winner and gave his team the three points as he celebrated his first professional goal with the Rouge et Noir (93', 3-2).

The game in pictures 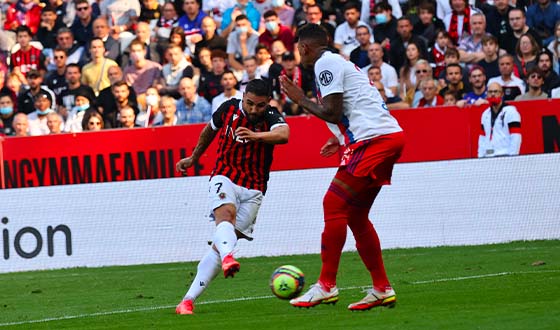 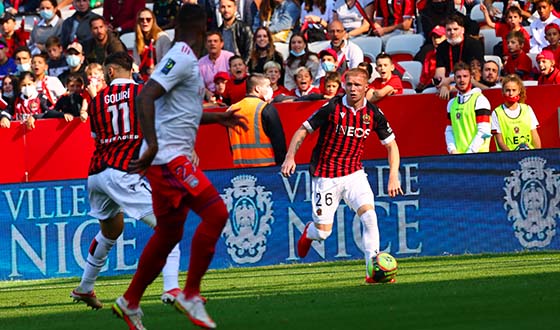 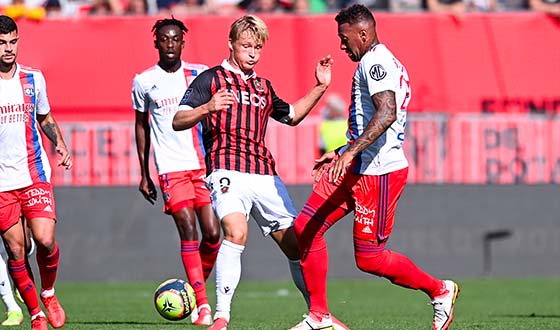 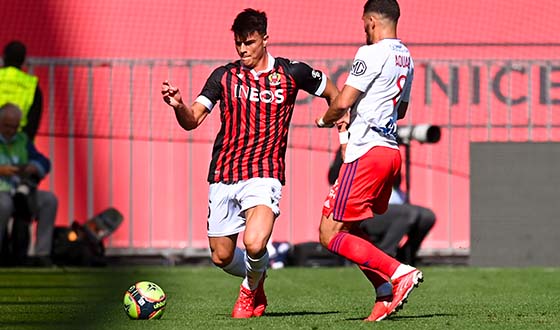 The crazy game against Lyon in pictures
28/24

Galtier: 'Anything can happen in a match'

Galtier: 'Anything can happen in a match'