No way to separate the sides in a crazy derby

In a frenetic and lively derby, which could have turned in either side’s favour in the final moments of the game, Nice and Monaco left the field on level terms at the end of Matchday 6 of L1 (2-2).

Le Gym first went behind after a goal from Golovin (39'), but reacted after the break through Delort (51') and Boudaoui (73') before being pegged back by a penalty from Ben Yedder (77'). And they left the park with regrets after Gouiri missed from the spot in the dying stages of the match.

Although the Allianz Riviera was empty on Sunday at lunchtime, the Rouge et Noir supporters made their presence known at the start of the 130th ever derby. Having travelled in their numbers, they brought colour, rhythm and atmosphere as Les Aiglons’ bus arrived at the ground. Driven on by this support, Christophe Galtier’s side started the match with a desire to keep the ball and look to attack. In the 13th minute, the first chance of the match fell to Calvin Stengs, who was found in the box by Amine Gouiri but his effort was blocked by Guillermo Maripan. In the minutes that followed, Kasper Dolberg was forced off after a knock and was replaced by Andy Delort (15’).

After the Dane left the field, the match changed face and ASM began a more effective pressing game. Les Monégasques took control of the Nice half and worked their way forward towards Walter Benitez’s goal. The Argentine stopper was called into action to deny Wissam Ben Yedder’s looped header (27’) and was then helped out by his defenders to block the French international’s strike (32’). While still on the floor, Benitez saved his side once more when Aleksander Golovin went close. A few moments later, in the final minutes of a first half that was dominated by the visitors, (55% possession, 5 shots vs 3), the Russian broke through the Nice wall. Found by Gelson Martins, he pushed the ball into the back of the empty goal and made it the first goal that Le Gym had conceded this season (39’, 0-1).

Like in the first half, Nice started the better in the second half. This time, Le Gym were able to take full advantage of the brighter start, with the goal coming from Andy Delort. Nice’s new number 7 was at the conclusion of an excellent team move. Gouiri was played down the left and found his fellow forward with a beautiful cross. Delort, who had picked up an assist at Nantes last week, scored his first goal with his new club and got Les Aiglons back into the game (51’, 1-1).

After getting back on level terms, Le Gym maintained control of the second half and left nothing to their opponents. Pablo Rosario looked dangerous from a corner, when Gouiri found him at the near post, but his header was pushed away by Nübel. After another two chances for Delort (69’, 70’), OGC Nice were rewarded for their positive play thanks to Hicham Boudaoui. At the far post, the Algerian struck powerfully and left Nübel with absolutely no chance (73’, 1-2). The game was brought to a close with a series of penalties. Although Wissam Ben Yedder converted his one to get the teams back on level terms once more (77’, 2-2), Gouiri missed the target from 12 yards out. Myron Boadu was denied by Benitez in a 1-on-1 and the two sides shared the spoils.

Le Gym will be back in action on Wednesday at Lorient (9pm). 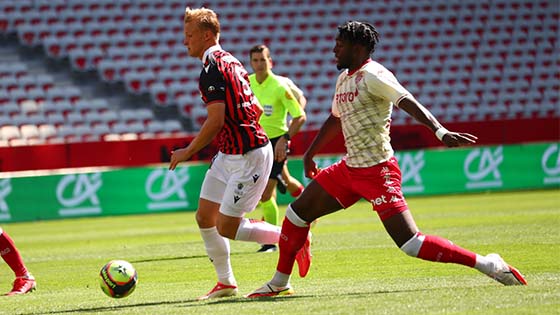 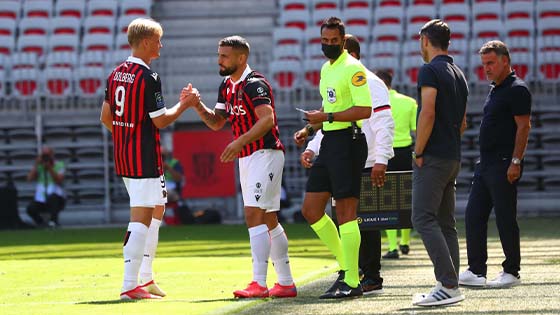 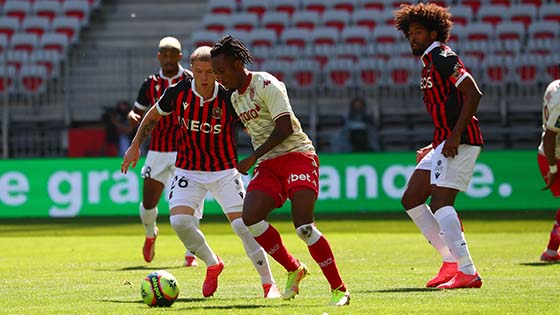 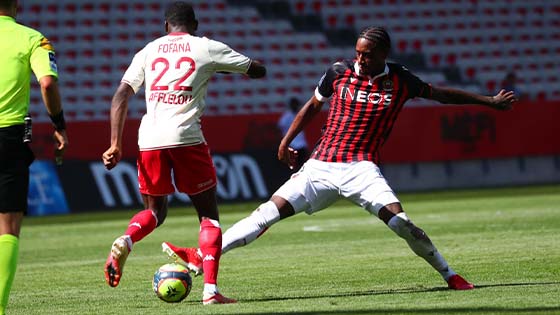 Delort: 'amine will score the next penalty'

Delort: 'amine will score the next penalty'

Galtier: “Perform for the whole of the match”

Galtier: “Perform for the whole of the match”

Final countdown to the derby

Final countdown to the derby

Four days to go until Nice-Monaco...

Four days to go until Nice-Monaco...