Since the 2015/2016 season, OGC Nice has been in partnership with the 'Bouchons d'amour' (Bottle tops of Love), which uses recycling and other initiatives to help the disabled.

Since 2001, 'Bouchons d'amour' has been collecting and recycling plastic bottle tops (water, milk, soft drinks, washing-up liquid, etc.). All the revenue generated is used to finance the purchase of equipment for disabled people.

It is "two good causes in one through which OGC Nice can mobilise all its component parts," said President Rivère. At the training centre, all the tops of the plastic water bottles drunk by the players are collected – and the same applies at the youth academy. Elsa Lamort, the Bouchons d'amour Alpes-Maritime representative, said: "A long-term partnership with a football club is a major first in France. Thanks to the help of OGC Nice, we're going to be more effective."

This is a long-term commitment "that makes sense", according to Mr. Rivère. "We commit to initiatives to write history together. That's the case here once again." 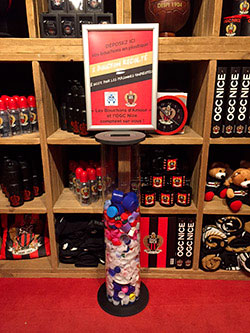 Everyone can participate. And since bottle tops are banned in football stadiums, you have the option of dropping them into special containers at the security checkpoints at the bottom of the steps to the Allianz Riviera concourse.

And why not separate them from the rest of your household waste and drop them off at each home game?

There's also a drop-off point at the official boutique at 4 Place Masséna.

All of our stadium caterers also participate in the initiative.

Each season, thanks to the Club working in unison, more than three tonnes of bottle tops are collected and then sold on by Bouchons d'amour.