The women's section was created in September 2005 and now has five competitive teams and five recreational teams with a total of 150 players. The aim is to bring young Nice players into the first team. The Women's Section's Technical Director is Matthieu Esposito, who is also first-team coach. He's assisted by Gaëlle Mauduit, Sporting Department Manager.

'Nice-style football for Nice girls,' starts with the Women's Football School (U6/U9). It was awarded the French Football Federation's (FFF) 'Gold' standard in 2017. The young players play five-a-side football, and are looked after by Jean-Yves Sépulcre, Julie Marichaud and Emma Grima. 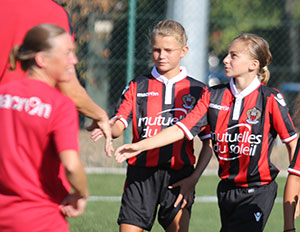 The U10F and U12F play eight-a-side games. They are coached by Laura Budin, Chloé Charrier and Sandra Rochetaing. They take part in the U10 and U12 boys' leagues in the Côte d’Azur District.

The U15F, coached by Gaëlle Mauduit, are in the U15 D3 Boys league. This team gives the girls the opportunity to start playing 11-a-side football before joining the U18F R1 team, coached by Enzo Duriatti (who is also assistant coach of the D2F team). The U18F R1 is the ante-chamber of the first team, and has brought through a number of players now playing at the highest level. They have a clear objective: reach the national level, where they have played in the past.

From the 2018/2019 season, primary and secondary school pupils have had a structure in place to allow them to both study and develop their football talent.

The Primary and Secondary School Section has been under the auspices of the FFF since 2018, with the primary section also benefitting from French Education Ministry certification since 2020. 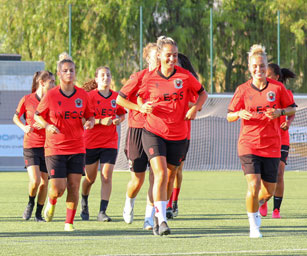 At the top of the pyramid are the two senior teams. The reserves, who play in the county league, coached by Christophe De Cool. They hope to eventually move into the regional league.

The senior team are in Division 2, coached by Matthieu Esposito, who has a squad featuring many players who came through the club's training programme. They're currently in their third season in the second tier, and are progressing year on year.

The goalkeepers are coached by Elie Bordas (Seniors and U18) and Maureen Saint-Léger for the youngsters. Lionel Letizi oversees all of the sessions.

All strata of the section have close ties, and the idea is to put in place a development programme from the grassroots up in line with the national aim of establishing youth academies across the country.

5 participations in six years in the national finals of the Pitch U13 Festival, finishing fifth once.