Twenty-five years on and OGC Nice are back in the final of the Coupe de France! After wins over Cholet, Paris and Marseille, Le Gym came out on top against Versailles (N2) on Tuesday evening (2-0). Thanks to goals from an incredible Amine Gouiri, and Kasper Dolberg, Les Rouge et Noir secured their ticket for the Stade de France, where they will face FC Nantes or AS Monaco on 8 May.

Not daunted by an Allianz Riviera filled with 26,723 supporters, Les Versaillais, who ply their trade in the National 2, started the semi-final in style. However, despite playing high in the Nice half, they struggled to put pressure on Marcin Bulka's goal. At the other end of the pitch, Les Aiglons were more precise technically, with Amine Gouiri and Calvin Stengs combining well to create the hosts first chance of the evening (5’). In the 35th minute, their link-up play led to the first real source of worry for the amateur side. In the box, the Dutchman struck with his weaker foot but was denied by Gustave Akueson. Almost ten minutes later, their desire to combine from a corner allowed Khephren Thuram the opportunity to head powerfully into Dan Delaunay's arms (43’). Although Les Niçois upped the rhythm in the closing moments of the first half, the two side headed in at half-time on level terms. 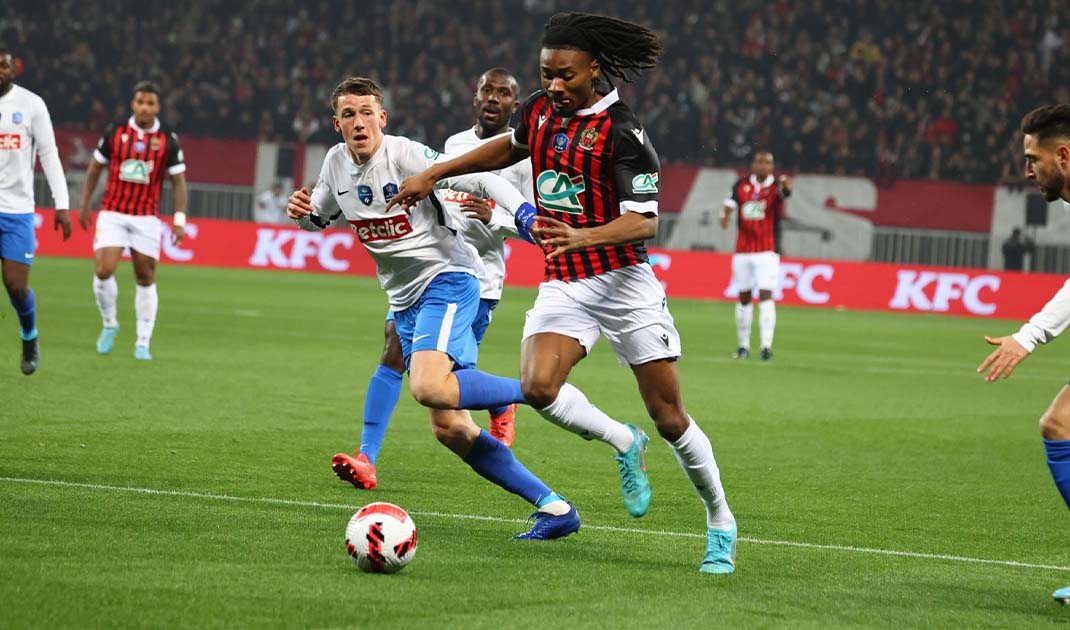 Gouiri gets Le Gym on their way

After playing a little deeper before the break, Gouiri pushed slightly further up the pitch at the start of the second half. Le Gym's number 11 tried to beat Akueson, but was denied by the defender. In the minutes that followed, the Nice top scorer was too quick to be caught on this occasion. Jordan Lotomba crossed into the middle, the young Frenchman controlled and then shot with the outside of his boot, leaving Delaunay with absolutely no chance (1-0, 48’).

In the same way as before the break, Stengs and Gouiri continued to link-up well. The former played the ball into the latter, but his effort lacked power (56'), before another attempt was blocked by the visitors (65'). Gouiri, the star of the second half, wasn't going to stop there as he kept pushing and this time, turned provider. After a delightful piece of skill which left three Versaillais in his wake, the goalscorer played into an unmarked Kasper Dolberg. Fresh off the bench, the Dane made no mistake and beat Delaunay down low (2-0, 74').

This was the goal that secured Nice's place in the final. 25 years later, Le Gym will travel to Paris where they will look to lift the club's fourth Coupe de France!

The schedule for the semi-finals

Tomorrow (Wednesday), FC Nantes and AS Monaco will battle it out in the other semi-final of the 105th edition of the Coupe de France. The winner of the encounter will take on OGC Nice at the Stade de France in the final on 8 May.

OGC Nice will be back in action at the Allianz Riviera on Saturday. In the league, Les Aiglons will host current leaders PSG (9pm) in a match which has already sold out.

The story of a historic evening!

The story of a historic evening!

Nantes join Nice in the final

Nantes join Nice in the final

When Amine Gouiri got behind the camera

When Amine Gouiri got behind the camera

21 Aiglons for the semi-final

21 Aiglons for the semi-final

A final place to claim TOGETHER!

A final place to claim TOGETHER!