A point to start the league

On Sunday, Le Gym began the new Ligue 1 season with a one-all draw with Reims at Allianz Riviera.

On top, but unable to lands a knockout punch in the first half, Les Rouge et Noir were unable to breakdown a defensive Reims in the first 90 minutes of the campaign. In the heat of the Allianz Riviera, despite the return of the public and Kasper Dolberg for the last half-hour, Nice weren’t able to provide a grand stand finish to the game, but showed plenty of solidity and discipline to earn a share of the spoils.

For his first Ligue 1 match as coach of Les Aiglons, Christophe Galtier renewed his confidence in the starting 11 that started the final preseason game against AC Milan (1-1). In a 4-4-2 formation, with the ‘first-choice defence of the summer of 2021 in front of Benitez (Atal, Todibo, Dante, Kamara), the (very good) Thuram-Rosario pairing in defensive midfield, Da Cunha and Kluivert on the flanks, and Ndoye and Gouiri up front, the Aiglons controlled the game for a good hour, before Reims came back into the contest in the final minutes, without really creating any danger to the Nice goal.

In the first half, Nice attacked down the left, where the duo of Kamara and Kluivert put Reim’s Belgian international full-back Foket to the sword, before the focus switched to the right in the second period. The only problem was that, despite some promising situations, the men from the Côte d'Azur were unable to find that little bit extra to give them the lead.

The first half saw Kluivert and Atal have chances with their feet and Ndoye with his head, but all the attempts missed the target. Only Todibo's effort from a set-piece was on target, but his header was saved by Rajkovic.

After the break, Ndoye put Rajkovic under pressure and had a chance in the air, as did Kluivert, but all without success.

Defensively, the Rouge et Noir maintained a constant pressure on their opposition for the full 90 minutes. They only conceded a few set-piece situations, but were largely solid at the back.

The fans were back at Allianz Riviera on Sunday 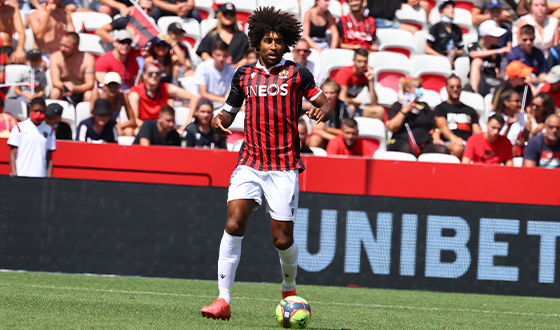 Dante made his return to Ligue 1 action

Kasper Dolberg was back on the pitch for Le Gym

Rosario, a debut full of promise

Rosario, a debut full of promise

Todibo: ‘We should win this type of match’

Todibo: ‘We should win this type of match’