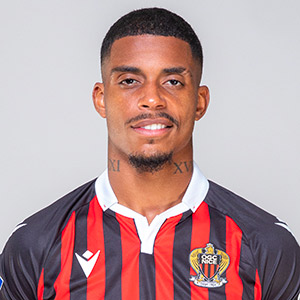 Since he made his Ligue 1 debut for Lorient against Nancy on 26 January 2013, Mario Lemina has played football in three other countries, namely Italy, Turkey and England. A technical player with the physique to boss the midfield, the Gabon international's "experience, his positioning, his intensity and strength" are all key elements for the team, according to coach Christophe Galtier.

After 55 first-team appearances for Lorient and Marseille between 2013 and 2015, Lemina won two Serie A titles with Juventus — playing 42 games — before heading to Southampton where he played two seasons before joining Galatasaray and Fulham on loan. He brought the wealth of experience garnered in 220 first-team career matches with him when he signed for OGC Nice in the summer of 2021, stepping back into L1 action when he replaced Khephren Thuram on the opening day of the league season.

Nine months later, the midfielder now boasts 36 appearances for Les Rouge et Noir. He scored two goals (against Lens and Marseille) and has become one of the key links in Coach Gaultier’s midfield.

Aiglon of the match from Marseille - Nice

Aiglon of the month

What's coming up for Atal and Lemina at the Nations Cup?

What's coming up for Atal and Lemina at the Nations Cup?