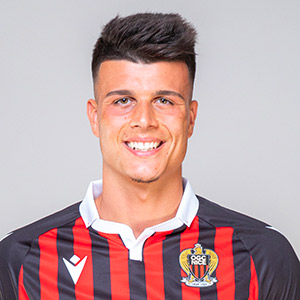 Flavius Daniliuc arrived in Nice from Bayern Munich, who are not the only major European club for whom the young Austrian has played.

He started on home soil at Admira Wacker and Rapid Vienna before joining the Real Madrid youth academy and then Bayern.

The solidly-built centre-back (1.88m) played mostly with the German giants' U19 side, captaining the team until his summer 2020 move to Nice. "I have learned a lot from these numerous experiences as a man and player, and I have retained a lot of positives," he said during his official presentation. "I know Nice give young players a chance to play. I have to show it at training, to improve. They're a club that looks to bring young players on. It was an easy decision, I was sure of my choice."

He was quickly proved right as he soon made his debut against PSG, and then made his first start against Reims, going on to make ten in a row in a three-man backline. Under Adrian Ursea, his versatility saw him played on the right of the defence, and he scored his maiden first-team goal in that role in a 2-1 win at Rennes. He made 26 first-team appearances in his first season, earning himself a call-up from his country's U21 side, which he now captains. He finished the 2020/21 season third in the vote for Best Young Player.

Under the watchful eye of Christophe Gaultier, the defender demonstrated his versatility, because on top of playing through the middle, he also helped out on the right side of defence. The number 5 played 27 matches this season across all competitions. He became captain of the Austria U21s and even made his 50th appearance for Le Gym during the 2021-22 season.

Questions for an Aiglon