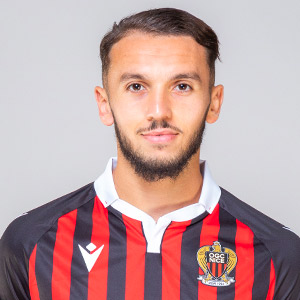 A Lyon youth academy graduate, he was given his Ligue 1 debut by Bruno Génésio at OL aged just 17. He made 15 first-team appearances for OL, and played in the UEFA Youth League (10 games, 3 goals, 1 assist) before joining OGC Nice on 1 July 2020.

"OGC Nice give youngsters a chance and it's a very good thing for me to be able to progress in a club which is growing with lots of young talents," Gouiri said on signing.

Having shone with France's U17 side at the 2017 EURO and at the U20 World Cup two years later, Gouiri quickly made his mark in Nice, scoring twice on his debut to earn the club a 2-1 win over Lens. He made 41 competitive appearances in his maiden season, the second-most among the squad's outfield players behind Hassane Kamara. With 16 goals and eight assists, it was no surprise to see him named Aiglon of the Season by the fans. He also moved up to the France U21 side, featuring in the 2021 U21 EURO, before picking up where he left off in the 2021/22 campaign, netting his first goal of the season in the 4-0 win at Lille on 14 August, 2021.

Gouiri, a man of influence

Gouiri, a man of influence

Gouiri firing on all cylinders

Another day another stat

Gouiri firing on all cylinders