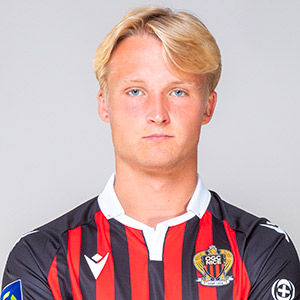 Kasper Dolberg joined Le Gym in late August 2019. The Denmark international, who featured in the 2018 FIFA World Cup, made his senior debut in 2015 aged just 18 with his hometown club, Silkeborg, and was quickly snapped by Ajax.

The 2018/19 Dutch title winner made 119 competitive appearances for Ajax (45 goals, 16 assists) before moving to France where he made his Ligue 1 debut on 14 September 2019 against Montpellier. He scored twice in his opening month in the red-and-black shirt, earning September's Player of the Month award, and capped a successful first campaign with a match-winning brace in the derby with Monaco. It took his tally to a team-high 11 goals and helped secure Europa League qualification. He was also named Crédit Agricole Aiglon of the Season. He made 29 competitive appearances in his second season, before helping Denmark impress at EURO 2020 in which he was one of his country's stand-out performers en route to the semi-finals.

After the international competition, he returned to the Côte d’Azur and started the season in style, with 3 goals in the first 5 matches of the season. The Dane went on to appear on 30 occasions during the 2021-22 seasons, picking up 7 goals

Denmark call up Schmeichel and Dolberg for World Cup

Denmark call up Schmeichel and Dolberg for World Cup