There was a lack of spectacle and chances at the Roudourou on Saturday evening, but the Gym remain solid and continue to pick up points.

Holder of the best current run in Ligue 1, aside from the incomparable PSG (12 points from the last 4 matches), the Gym travelled to the Red Lanterns in confidence (4 wins in 4 years at Guingamp) but also with a hint of suspicion against an injured side that recently recalled Jocelyn Gourvennec, the coach who had led them to the Europa League. After the convincing victory over Lille last weekend, Patrick Vieira stuck with his unchanged 5-3-2, and kept 10 of the 11 starters, after talisman Christophe Jallet picked up an injury in training this week.

There is no point in skirting around the issue, the goalless draw that was witnessed on Saturday evening at the Roudourou couldn’t have been more deserved. With two shots on target for the home side and one for the Gym, neither side managed to take hold of the encounter. Only one shot on target was landed in the first half, coming from Marcus Thuram on the 30 minute mark, but he could only find the excellent Walter Benitez, who made a great reflex save to deny the home side’s top scorer (33’). In the first seconds of the game, Mario Balotelli saw a powerful effort just squeeze past the post (2’). But what had seemed a good starter for ten, eventually turned out to be the Aiglons’ only real chance in the first 45 minutes. Not really worried but frustrated by the home team’s four-man midfield, Patrick Vieira’s squad didn’t manage to hold the ball high up the pitch. After recovery, the chances were few and far between and the Nice forwards weren’t available enough. Thankfully, in defence, captain Dante was once again imperious, mastering Thuram (13’) and blocking a strike from Ngbakoto (17’). 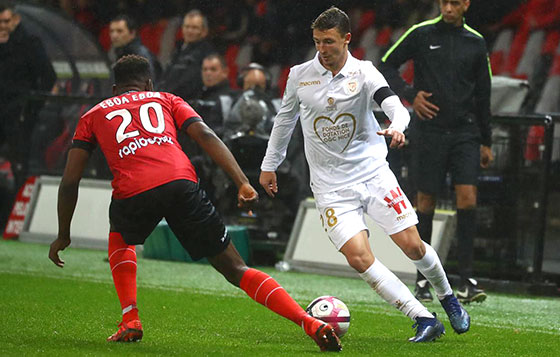 Patrick Vieira tried to correct things at the break by replacing Saint-Maximin with Ganago. Then quickly making a second with Makengo coming on for Tameze (56’). Nice played slightly higher up the pitch, but didn’t really trouble the opposition’s goal. The first (and only) strike on target for the Niçois came from a direct free-kick, taken by Balotelli, but it didn’t pose a problem for Johnsson (74’). You had to wait for the last ten minutes of the game to see real chances for the Red and Blacks. The two subs Ganago and Makengo combined, but the right-footed effort from the second of the two flew over (80'). Two minutes later, Boscagli was played in deep by Sarr, but miss-hit his lob over Johnsson who he had seen well off his line (82'). The Gym had - just about - dominated the game but could have been punished in the closing stages of the game, if it wasn’t for another reflex save from Benitez, after a header from Cheick Traoré (90'+1). A save that takes his total of consecutive saves to 24 and ensures 498 minutes of football in Ligue 1 without conceding a goal.

This 24th point allows the Aiglons to consolidate their place in the top third of the table, on the eve of a busy week in which they will welcome Angers (on Tuesday 7pm at the Allianz Riviera), before a trip to the Principality for the derby (Friday at 8.45pm). 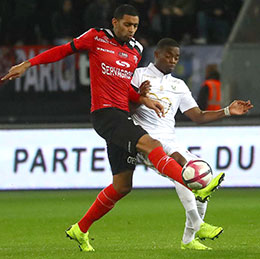 The highlights of Guingamp 0-0 Nice

The highlights of Guingamp 0-0 Nice

Vieira: "One point, nothing more"

Vieira: "One point, nothing more"

The squad for Guingamp

The squad for Guingamp

A fitness update before Guingamp

A fitness update before Guingamp