Le Gym back to business!

Le Gym are back underway! On Saturday, Les Aiglons secured victory at the Allianz Riviera over Angers, in Matchday 15 of L1 (3-1).

The features of the match

A team lacking in confidence against a side in confidence. This was the context going into the game between Le Gym and Angers before kick-off. At first, this context would be reflected, before being smashed to pieces during a beautiful autumnal evening, because Le Gym never gave up, showed character and in the end, got going again, in style.

In their own manner, the visitors looked dangerous at every set-piece. They barely found the target, but did hit the back of the net with their first effort of the game, when Fulgini broke through in between Myziane and Nsoki and beat Benitez with a powerful effort (0-1, 21’). The second strike on target - an effort from Santamaria – was safely dealt with by the Argentine (35’).

And where was Le Gym in all that? The home side dominated possession (57% in the first half, 53% in the second). They didn’t do everything well when playing out from the back and gave the men from the West several chances. But on the whole, Coach Vieira’s side looked strong.

And above all, Nice wanted to play. To push forward, to keep their width, add pace and speed into the danger zones. Against Angers’ two lines of defence, the task at hand was arduous. But their positivity would eventually pay off. Down the left, Myziane worked endlessly and looked to add punch to the encounter.

Well played in by Nsoki, he started the match as he meant to go on, beating Pavlovic with a dummy, but was unable to find the target with his left-footed effort (11’). He then perfectly crossed in for Lusamba at the end of the first half, when Cyprien’s pass was flicked on by Lees-Melou, and Arnaud got his side on level terms, after finishing with his stomach.  Not the most conventional finish but incredibly effective (1-1, 40’).

The start of the second half seemed rather difficult. Angers added extra rhythm to their game and Le Gym began to doubt. Fulgini almost got his brace, but missed the target… A godsend then came for the home side and they made the most of a beautiful team move. A marvellous example of link-up play that changed the face of the evening. At the start of the move, Dante, high up the pitch, sent the ball into Dolberg. The Danish had eyes in the back of his head and flicked on for Lusamba, who then found Lees-Melou through the middle. In the same way as his Danish teammate, PLM had already seen before receiving the ball, and back heeled through to Myziane, who buried the ball into the back of the net (2-1, 53’). One touch football at its best. This goal served as a detonator and the men from the Côte really got going and started to develop their moves. Ounas had a chance which went just wide (63’), and there was another opportunity for Lusamba, when Myziane crossed into the box, but the first goalscorer of the evening couldn’t beat Butelle (66’).

In the minutes that followed, Angers made the most of a misplaced pass to counter quickly, but Alioui’s goal was eventually flagged for offside (70’). Benitez continued to do the business at the back, denying Thioub (72’) and things seemed as if they may have been tied up for the evening.

Long balls over the top killed off any suspense at the end of the game. After some impressive defensive work from PLM, Dolberg found Lusamba, who played the ball back into the Danish forward, and the former Ajax man ran at goal and ended the evening in the best way possible.

At kick-off, Benitez was in goal behind a back four of: Atal, Dante, Sarr and Nsoki.

In midfield, Cyprien started in front of the defence, Lees-Melou and Lusamba played the box-to-box roles. For his return to the starting eleven, the n°22 looked particularly inspired and was involved in all of the Nice goals.

Finally, Ounas and Myziane - starting for the first time since the trip to Strasbourg - played either side of Dolberg.

Shortly after the hour mark, Boudaoui came on for Ounas, and Le Gym switched to a 4-4-2, with Lusamba supporting Dolberg.

Finally, Coly and Claude-Maurice were like-for-like replacements for Nsoki and Myziane.

The match in photos 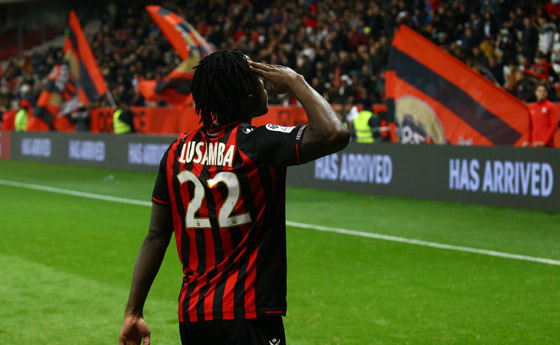 The results from Matchday 15

After the results on Saturday, OGC Nice are in 11th, three points behind Montpellier (4th) and four points behind the visitors, Angers (3rd).